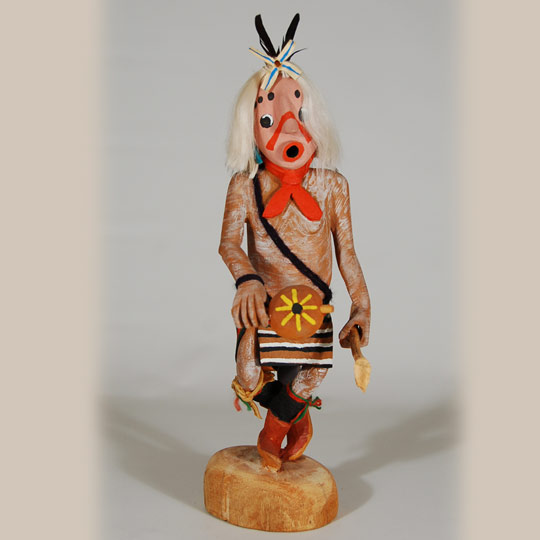 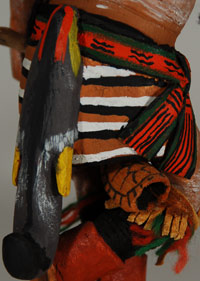 Barton Wright lists the Huhuwa Katsina in his book Clowns of the Hopi but states that he technically is not a clown but is revered so much because of his legacy.  Folklore has it that this katsina is the spirit of a man from Second Mesa who had some crippling disease that left him barely able to walk.  Despite this handicap, he was so cheerful and eager to help others that he still continues among the Hopi as a katsina.  He often appears as a pair of katsinas hobbling about some village during a ceremony chattering between them.

Huhuwa is probably chosen more often as a gift-giving katsina at Powamu times than any other katsina, according to Wright.   He is noted for his remarks which are always humorous.  He imitates the dialects of the various villages and the funny things the villagers have done.  His clothes are always ragged and give the appearance of having been rescued from the moths in some Hopi storeroom.

Barton Wright classified the Hopi clowns into categories into which he felt they would best blend.  He put Huhuwa in the group called Comic Kachinas with Kokopelli, Kokopell’mana, Mastop, Qöqöle, and others.  This says he is a funny katsina but not a ribald one like the Koshari.

Wilburt Talashoma, Sr. is the father of famous Hopi carver Lowell Talashoma,Sr. Both father and son have passed away but both have left a legacy of some wonderful carvings of katsinas.  Wilburt was the son of Jennie and Willie Quotskuyva so I do not know where the Talashoma name came from.  He was born in the Hopi village of Bacavi on Third Mesa.  In World War II he served in the U. S. Army in France and Germany.  He was once commissioned to carve twenty-one dolls for a travelling exhibit organized by the California Academy of Sciences, an honor bestowed on an outstanding carver.  He was a Hopi, a farmer and a carver all his adult life.

This carving of Huhuwa well illustrates his name of “cross legged.”  It was beautifully carved with a pocket knife and no electric equipment. His sagging chest, full stomach and rolls of fat on his back add to the humor of the doll as does his funny face.  Wilburt did a wonderful job of carving and painting this doll. He carries a digging stick, a tool of farmers, in his left hand and a gourd rattle in his right.

Provenance: from the estate of Tom Mittler, a former resident of Michigan and Santa Fe who purchased it at Garland’s in Sedona in 1989