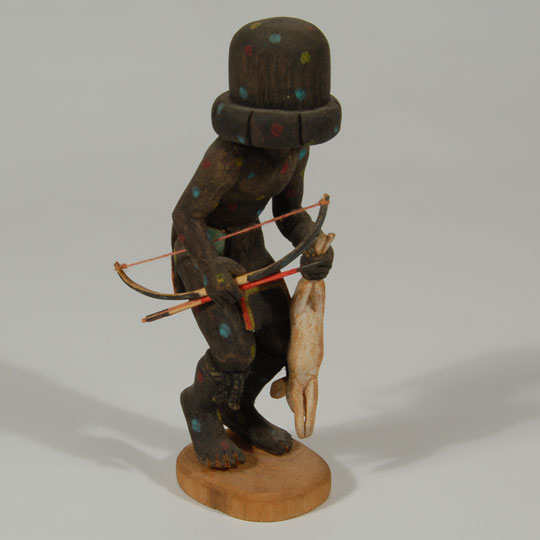 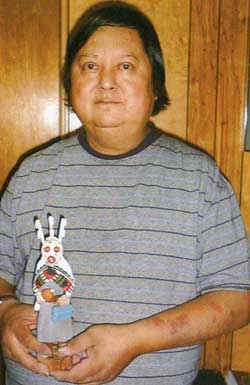 A pre-pubescent boy always portrays Kokosori. Formally his presentation was without clothing. He is one of the oldest recorded katsinas for the Hopi, as he was seen in 1852 according to documented records. He is best known in Zuni Pueblo, where his name is Shulawitsi. At both Zuni and Hopi, he is often referred to as the Fire God Katsina.  He appears on all three Hopi mesas in differing functions.  As portrayed here, he is shown after a successful rabbit hunt.

Lowell’s life story possesses some of those rare qualities that distinguish those of legendary proportions from the ordinary. At less than two years of age he was moved from his family home on the Hopi mesas in Northern Arizona. Due to hard times, Lowell's parents gave their permission for this son to go to Utah and live with an elderly Mormon couple. Reared by this couple as an “only” son, Lowell discovered mainstream America and a Christian household. On a visit to the reservation as a young man, Lowell made the decision to return and live his heritage.

A natural artist, Lowell Talashoma, Sr. (1950-2003) produced drawings and sculptures with perspective, proportion and grace at an age when other children marked out crude symbols. While still in grade school he whittled a freely-turning sphere within a cage from a single block of wood. He would, while still a child, illustrate a story as it was being read aloud.

Lowell was recognized early in his career as an outstanding carver of katsina dolls.  He mastered the techniques of one-piece carving and painting his dolls with oil based stains.  This Kokosori is typical of his outstanding work.  It is signed on the underside of the base.  The carving probably dates to the 1980s.

Recommended Reading: Kachinas: a Hopi Artist’s Documentary by Barton Wright with original paintings by Cliff Bahnimptewa.  This book is currently not available from Adobe Gallery.

Provenance: from the collection of a family from New York to whom we sold many Hopi katsina dolls in the 1980s and 1990s.