The Hopi have converted many of their neighbors into katsinas.  These katsinas are not borrowed from these groups but are instead figures who represent that tribe of Indians.  The katsina is believed to be the essence of the people and in no way a true representation of their actual appearance.  Ethnologists speculate that this may have begun as an effort to capitalize on the luck or power the other tribes apparently possessed.

Each of these Indian groups has an aspect that has been captured by the Hopi and incorporated into their katsina forms to produce a type.  It may be the dress and pose of a Navajo Katsina Girl or the body paint of an Apache, but the result is a characterization. This type is much the same as our over-simplification of the humorless British, the French lover, or the stolid German.  These katsinas have roles in many ceremonies or dances without any consideration of their ethnic overtones. They are most often, however, found in the position of uncles when occurring in the Mixed Dance or as groups in the Plaza Dances. - Wright 1977: 66

The Konin katsinam depict the Havasupai tribe, which resides at the bottom of the Grand Canyon.  The Konin and Konin Mana perform together in a single line, alternating male and female. Both male and female are very colorful.  They appear during Angk’wa and the summer katsina day dances. Their songs are about moisture in the form of rain. - Secakuku 1995: 83

This version of the Konin Mana is a mid-20th century carving.  It is not signed by the carver.  The paint is a water base type which predates the use of acrylic paint.  It stand firmly without support, however there is a metal stand provided with it although it is not necessary.

Provenance: from the estate of Santa Fe resident Martha (Marti) Struever, who passed away in August 2017. 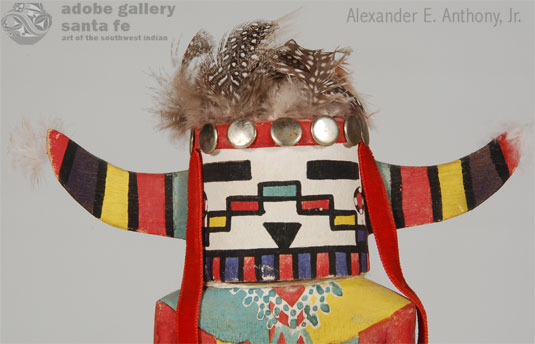