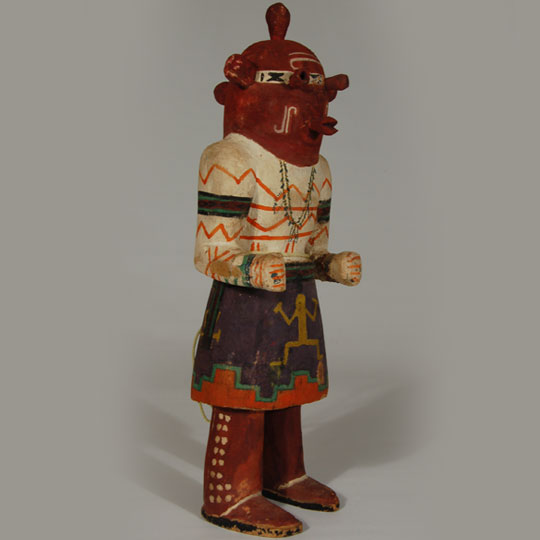 This personage has been known by several names—Mudhead, Koyemsi, Clown, Tachukti, and has been referred to as a Katsina.  Barton Wright states that it is not considered a Katsina at Hopi and that Mudhead and Koyemsi are both nicknames and that Tachukti is the correct name but that he is not a clown in the sense we normally consider a clown.  It will, however, always be called a Mudhead as that name has existed for a hundred years already and is not likely to go away.

At Hopi, he is a curer, magician, dance director, warrior, messenger, sage or even a fool.  He also may appear in the guise of any Katsina by donning the clothing of that Katsina.  They appear as interlocutors between Katsinas and humans.

In this carving, the Mudhead is dressed as a Kwivi Katsina.  Kwivi is a term that means someone who is overly dressed or too proud of his appearance, sporty.  It can be used for any Katsina who wears lots of silver and is very fancy.  However, in this case it has become the name for a Katsina that represents one of the Hopi versions of a Navajo.

The Kwivi usually appears in a regular katsina dance and may be seen on all three mesas.  When a dancer wears a Mudhead Katsina mask over the dress of another Katsina, such as this Kwivi, he is taking the place of a missing individual and performing his ritual.  In most cases, the role is not that important and the Koyemsi replaces the Katsina simply by donning his garb and acting out his functions.

The doll is labeled “Tasap Koyemsi” on the foot but is dressed more like a Kwivi Katsina so we have listed him as a Kwivi Koyemsi.

- Originally in the collection of The Kachina House on Delgado Street, Santa Fe.

Reference and Recommended Reading: Clowns of the Hopi: Tradition Keepers and Delight Makers by Barton Wright