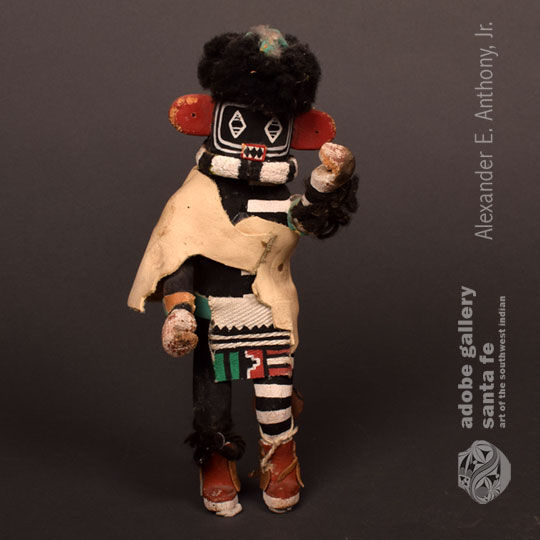 The Left Handed Katsina is so called because he carries his bow in his right hand rather than in his left. In fact, he generally does everything backwards. The reason for this is not clear. The Hopi say he came to them from the Chemehuevi Indians. He appears quite frequently in a great many dances, like the Mixed Kachina, in groups in the kivas or separately as a warrior in the Powamu Ceremony. He may act as a prompter in a dance or be found making odd little bows and taking small mincing steps at the edge of a procession.  A great deal of the time he has trouble with Hó-e when they appear in the same dance. - Wright 1973

The left side of the body is painted in black and white stripes like the Koshare clown and the other half of the body is minus the stripes.  He wears a fur headpiece with feathers attached on top of the head.  He dresses only in a loin cloth and a buckskin cape.

Condition: good condition but missing items in each hand.  It appears that the young female recipient of this one chewed on the ears and hands of the doll, a good indication that it was a gift from a katsina to a young child.

Provenance: Hopi Left Handed Katsina Doll, circa 1950s - from the extensive collection of a family from Oregon

Recommended Reading: Kachinas: A Hopi Artist’s Documentary by Barton Wright with paintings by Cliff Bahnimptewa.  This book is currently not available from Adobe Gallery.