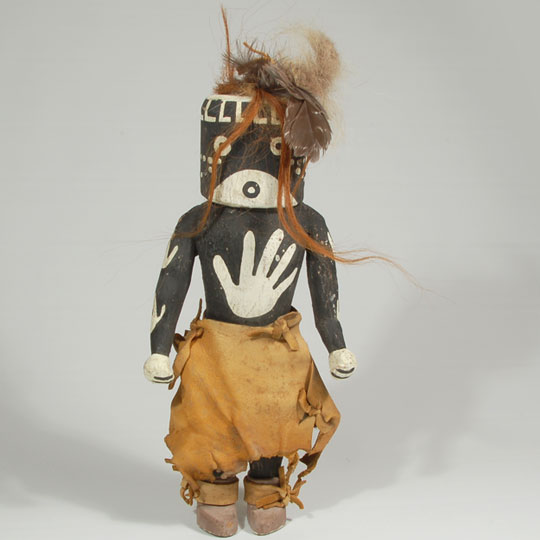 The following description of the Mastop Katsina is from Barton Wright’s book referenced below:

“The Mastop Kachina is the second kachina to appear on Third Mesa.  He is not present on Second or First Mesa.  These kachinas always arrive in pairs and come bounding out of the northwest on the next to last day of the Soyal.  As they rush into the village they beat all the dogs that they encounter using the short black and white staff which they carry for that purpose.

“Leaping about with many antic gestures, they make their way to the Chief Kiva where they talk in disguised voices with the individuals inside and with each other.  Then, as though suddenly becoming aware of the females in the audience, they dash madly into a cluster of women and grab their shoulders from behind and they give a series of small hops indicating copulation.  Then they return to the kiva and converse for a while before again dashing over to another group of women, repeating the action until nearly every woman present from child to the very oldest has been approached.  All women, even the shy ones, do not avoid this embrace as it is a serious fertility rite despite the antic touches, which are never directed towards the women.”

This carving is a good representation of the Mastop Katsina.  He has painted hands on his body, front and back.  He wears a leather kilt.  There is no indication that he ever carried anything in either hand. He stands unaided and leans forward slightly.

Provenance: from a gentleman in northern New Mexico 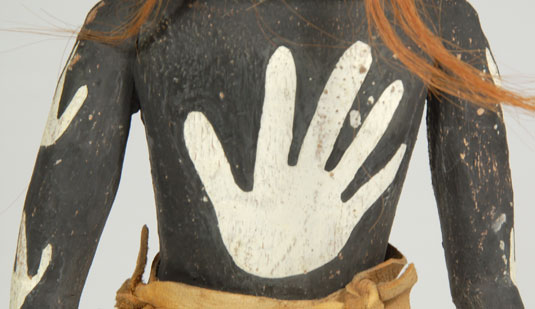