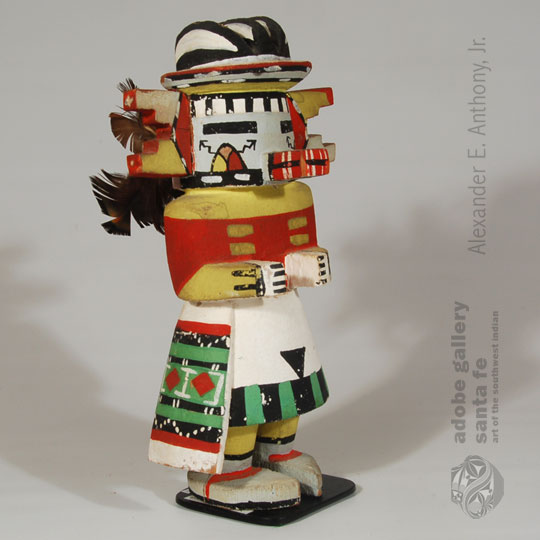 According to Barton Wright, “the Omau-u Katsina formerly appeared in the Mixed Dances.  For some reason this katsina has dropped in popularity since the early part of the 20th century and now virtually is unknown.  The doll appears only in older collections.  It appears to have been a katsina representing clouds in general and its form was widely variable.”

In Harold S. Colton’s book Hopi Kachina Dolls with a Key to their Identification, he states that the Cumulus Cloud Katsina is Tukwünag, with the following statement: “At First and Second Mesas, white case mask with cloud symbols on top.  Third Mesa, no mask. . . . Appears in Mixed Kachina Dance and Hopi Salako Ceremony. Said to bring summer rain.”

From the above statements, it may be that the Tukwünag Katsina, which is totally different in appearance, has replaced the older Omau-u Katsina.

This katsina doll is representative of Omau-u, not Tukwünag. The appearances of the two katsinas is totally different.  It came from the estate of Marti Struever with a statement that is was attributed to Hopi carver Jimmy Kewanwytewa, who was active from 1910 to 1966.  It is not signed, however, most of his dolls were not signed by the carver.

Provenance: from the estate of Santa Fe dealer and collector, Martha (Marti) Struever who passed away in August 2017.

- Colton, Harold S. Hopi Kachina Dolls with a Key to their Identification, 1959. 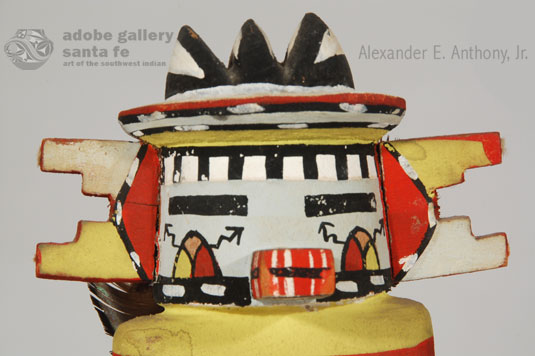