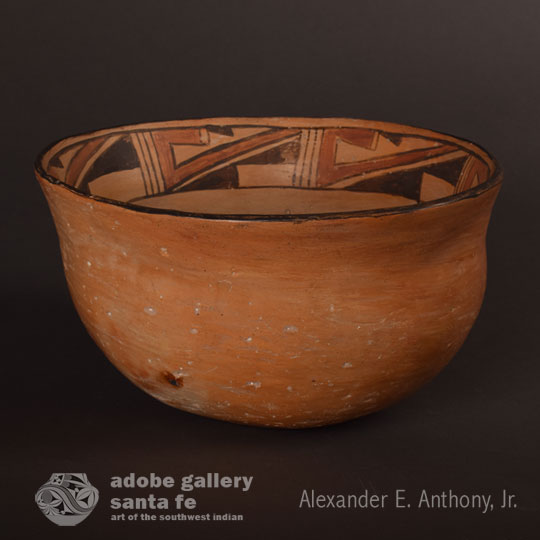 A large part of the charm of Hopi pottery is the warm orange blush achieved during firing and deep black fire clouds resulting from firing.  Coal firing is responsible for these attributes.  This bowl has both a warm blush and a beautiful array of fire clouds on the exterior.  The vessel shape has been referred to as a helmet-shape, based on such shapes of World War I helmets, but there certainly is no connection between the Hopi’s development of this shape and the commercial development of the war helmets.

Southwest Indian pottery bowls of this shape and size were staples for serving stews and other dishes during meals.  Normally, older ones like this show some evidence of having been used but this one does not.  It was apparently sold before ever being used.

Condition:  this Hopi Pueblo Polychrome Helmet-style Historic Pottery Serving Bowl is structurally in very good condition but there is some spalling of the surface mostly on the exterior.

Provenance: from the family collection of residents of Arizona