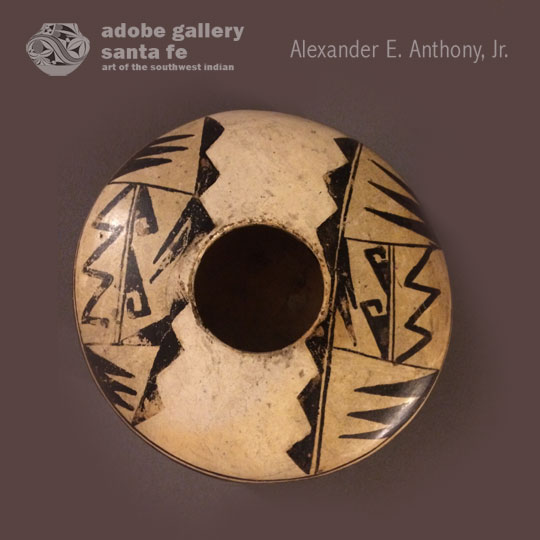 This Hopi-Tewa historic pottery seed jar appears to date from the early 1900s, shortly after the Polacca Period of Hopi wares.  It is a style popularly sought by trader Thomas Keam from the potters to fill his needs for tourist and museum sales.  In addition to his collection, which ended up in the Peabody Museum at Harvard University, many equally important vessels ended up in personal collections.  This is one of those.

The design is simple, yet bold, consisting of a string of dark brown triangles setting a border line for the remainder of the design, which was laid out in four quadrants.  Two designs are triangular boxes with three long and thin triangle spikes. In the middle of these are two boxes, one containing a zigzag line and the other a pair of Sikyatki-style bird units and a pair of thin triangle units.  The overall design is repeated on opposing sides of the center hole.

The rim, thin framing line, and thick framing line were executed in the brown pigment.  The framing lines each have a ceremonial break. The underside is slightly rounded and undecorated.

Condition: There is a small crack in one of the unpainted areas on the top.  A blacklight inspection reveals some overpainting on the top and bottom.