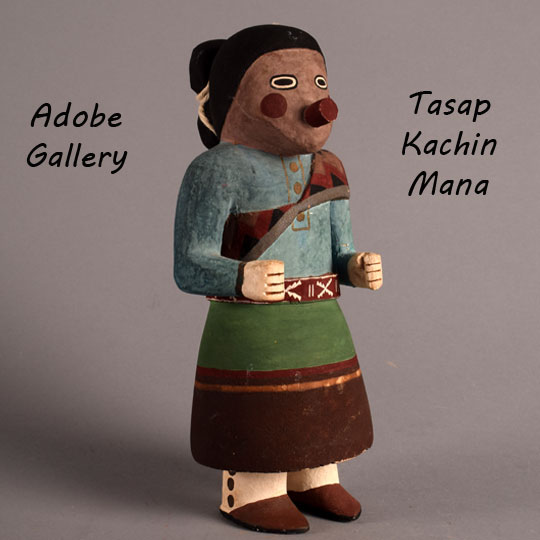 This wood carving features a Hopi Pueblo Tasap Kachin Mana Katsina. She was carved from cottonwood root, in the traditional Hopi manner. The style of carving is that of the early twentieth century, however she is later, most likely 1940s.

Her blue blouse and multi-colored skirt replicate the clothing worn by the Diné women since the late eighteen hundreds. She wears a traditional Navajo blanket draped over her shoulders. Her rosy cheeks and tubular mouth are traditional to the katsina. On the back, her hair is tied in a chonga in traditional style. Her legs are wrapped in white leather leggings over the tops of her brown moccasins. The carving is from a single piece of wood except perhaps for the mouth.

The Tasap Kachin Mana dances alongside the Tasap Katsina in the regular katsina dance, but she may also appear at odd intervals during the katsina season. The mask is a Hopi caricature of the Diné and their manner of gesturing with the lower lip. Despite this, she is a part of a group that is very popular with the Hopis.

Provenance: this Hopi Pueblo Kachina Doll Tasap Kachin Mana Katsina is from the collection of a client from California