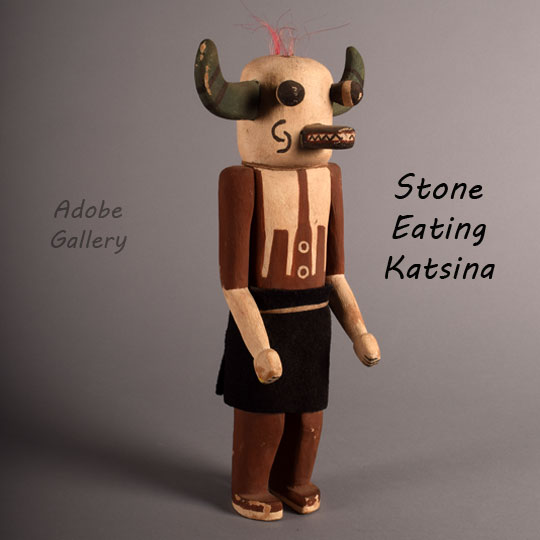 This tall, serious-looking katsina doll has a name that has been spelled a couple of ways—Owa-ngazrozro (Barton Wright); Owa-ngaroro (Harold Colton)—but I understand that the latter spelling is in use today.  His more common name is Stone Eating Katsina.

“The Stone Eating Kachina is one of the older Hopi Kachinas and shows great variation between mesas.  There appear to be two types currently—one that is seen on First Mesa and at Shungopavi and the other at Mishongnovi and Third Mesa.  Each of them has minor variations by village.  The kachina may be seen most often in the Powamu.  He is one of the Angry Kachinas and is usually led about with a rope around his waist which is held by a Koyemsi; although the rope may also be used to tease this ill-tempered personage.  Presumably when rocks are thrown at him he catches them and eats them.  On Second Mesa he is primarily a guard and a butt for the antics of the clowns.” [Wright, 1973;45]

The illustration shown in Wright, page 45, has the same features as this carving, which is identified as the one that appears on First Mesa.  His face is white and the marks on his cheeks are friendship symbols.  He has pop eyes and a long snout.  His body is brown with white marks on his chest and a pair of white circles as well.  He is wearing a plain black kilt and has a string tied around his waist for use as described above.  He has a slim, long torso with long arms typical of the early style carvings.  Generally, this katsina has long red hair hanging over his face.  The red hair on this carving is now shorter from strands breaking over the decades.

Provenance: this Hopi Pueblo Owa-ngazrozro Katsina, Stone Eating Kachina Doll is from the extensive collection of a gentleman from California