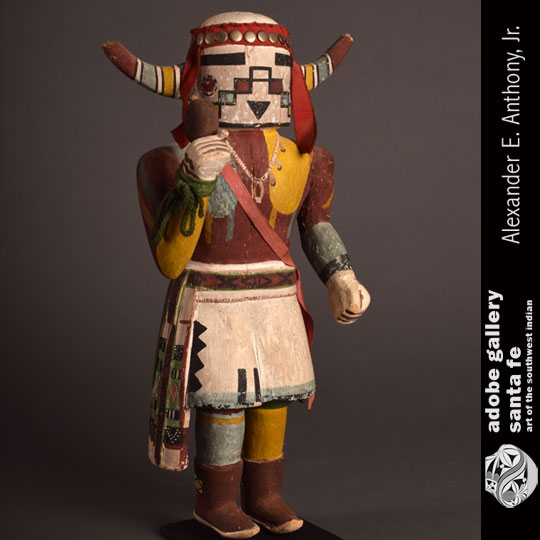 Koninkatsinam depict the Havasupai tribe, which resides at the bottom of the Grand Canyon. This carving represents the male member of the katsinam. Konin maidens (Koninkachinmana) usually accompany them during the dance, which is in a single line, alternating male and female.  There are Hopi versions of katsinam that honor and depict other tribes, such as the Navajo, Havasupai, Comanche, Zuni and other Pueblos.

Koninkatsinam are very colorful, appearing during Angk’wa and the summer katsina day dances. Their songs are about moisture in the form of rain, with references to the taking of the mule deer bucks, the suta (red sienna), buckskins, and Kwaani (dried figs), all of which the Havasupai traded with the Hopi.

These katsinam are not borrowed from the Havasupai, as they are unique to the Hopi. They have the same purpose and functions as all the Hopi Katsinam. They are messengers and-or intermediaries to the rain gods. Since they are katsinam in every respect, they are afforded the same reverence and dignity during their visits.

There is more than one version of the Koninkatsinam.  This one has a pair of horns and ribbon around his forehead.  He wears a ribbon across his chest. A nugget necklace is painted around his neck and a ketoh painted on his left arm.  In his right hand is a rattle and yarn around his wrist. Feathers on the back of the mask and tips of the horns have been removed in accordance with Federal regulations.  The embroidered sash hanging on his right side is elaborate in design and is part of the original wood root.

The doll has one foot off the ground indicating he is in a dance position.  A metal stand has been provided but can be removed if one wishes to hang the doll.

Condition: This carving dates to the 1930s-1940  time period and is in very good condition for its age.  There are minor drying cracks in the wood. Whatever he carried in his left hand is missing

Provenance: this Hopi Pueblo Koninkatsinam Cottonwood Root Katsina Doll, circa 1940 is from the collection of a Santa Fe family