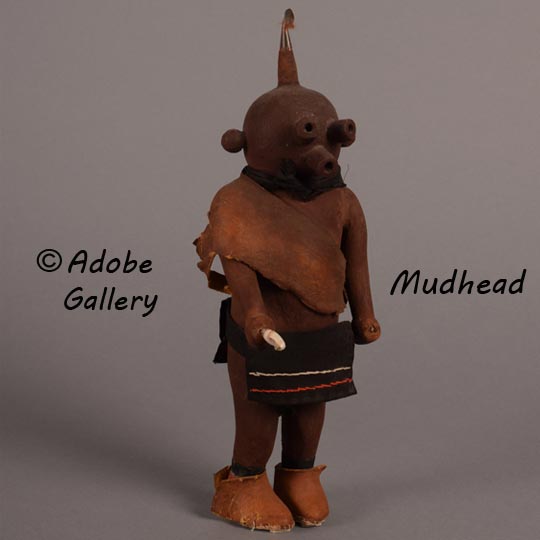 It is not unusual for this doll to be called a Mudhead Katsina or a Koyemsi as those are names that have been used for a hundred years or more.  Barton Wright states that it is not considered a katsina at Hopi and that Mudhead and Koyemsi are both nicknames. Wright states that Tachukti is the correct name, Tachukti being the name of a clown, however, Wright says that they are not clowns in the sense we normally consider a clown.  It will, however, always be called a Mudhead as that name is not likely to go away.

At Hopi Pueblo, he is a curer, magician, dance director, warrior, messenger, sage or even a fool.  He also may appear in the guise of any katsina by donning the clothing of that katsina. The Koyemsi appear as interlocutors between katsinas and humans. They serve religious and secular functions. They function as chiefs and as clowns at various times. They are probably the most popular and recognized of all masked dancers. They appear in almost every ceremony as clowns, drummers, announcers of dances, and many other roles.

There are several Mudheads, differing slightly in appearance and conduct, maybe as many as ten or more.  All wear knobbed masks of cotton cloth, stained with the same red clay that is used on their bodies. The knobs of the masks are filled with cotton balls and seeds. Wrapped around the base of the mask is a scarf.  They dress solely in black cloth kilts.

This carving of the Mudhead, is an excellent example of the finest workmanship on such a carving.  The body features were rendered to scale, beautifully carved and painted. It is typical of the style carving from the mid-20th century.  It was not signed by the carver.

Provenance: this Hopi Pueblo Koyemsi or Mudhead Katsina Doll is from a gentleman in Virginia

Reference: Clowns of the Hopi—Tradition Keepers and Delight Makers by Barton Wright