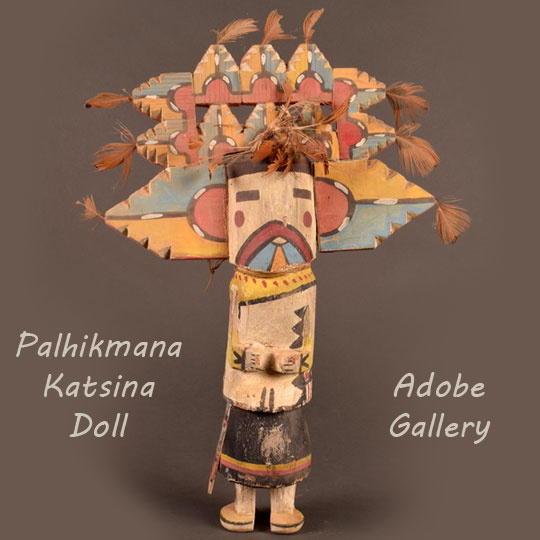 This Palhikmana Katsina Doll appears to be one made by Hopi Pueblo carver Walter Howato.  It is not signed, however. I make this attribution from experience of having purchased dolls from him in the 1980s-90s.  The wood is heavier than cottonwood root and is perhaps cottonwood limb. The Palhikmana Katsina was a favorite of his, perhaps because it was a favorite of collectors, too.  The wood from which he carved this doll is slightly curved producing a feeling of motion of the doll as if walking along.

Walter Howato (1921-2003) was an interesting man.  When we met, he was living in Denver and would drive to Albuquerque to bring dolls to sell.  But that was late in his career. Earlier, his education had been at the Santa Fe Indian School in the 1930s.  He was then hired by Walt Disney Studios where he “played as an Indian at Disneyland and sometimes painted” he said, as well as interior decorating with R. C. Gorman, who also was in California at that time.  Leaving Disneyland, he returned to his Hopi home where he found it difficult to earn enough money to support his family. He then went to work in construction where he helped build Glen Canyon dam to form Lake Powell.  In his forties, he returned to making katsina dolls and he chose to make them in the old style and he perfected pigments that made them look old. Howato passed away in 2003 at the age of 82 years.