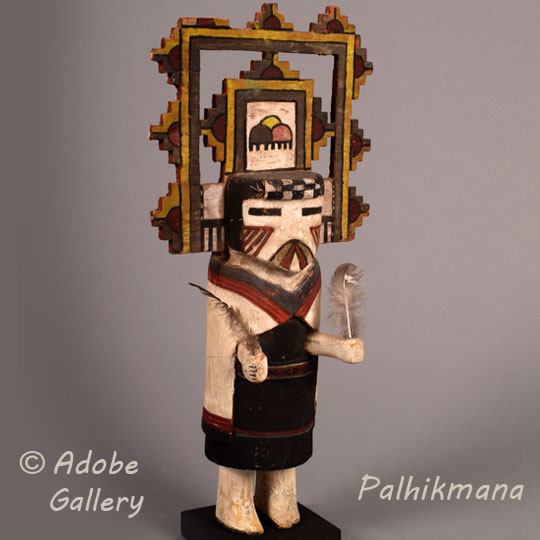 This carving of Palhikmana Katsina is an all-wood carving that appears to be from the 1940s. It was carved from cottonwood root and painted with water-based paints.  The arms protrude straight forward from the body.  The tablita is made from a single piece of wood.  One of the top stepped items on the tablita is broken.

This carving is an excellent representation of Palhikmana Katsina.  It has the correct markings on the face, and the traditional black manta over which is the white manta.  The doll wears white moccasins.  She has been mounted on a black pedestal, which is removable.  Feathers on the face and tablita have been removed in accordance with federal regulations.

Alph Secakuku, Hopi author, describes the function of Palhikmana in his book Following the Sun and Moon—Hopi Kachina Tradition as follows:

“Palhikmana is a katsina maiden with several functions.  She can appear during Angak’wa as a Polimana (Butterfly maiden) or as a Corn-Grinding maiden, or she can perform a special dance.

“During the Ösömuya, a season encompassing the month of March, a series of katsina night dances take place in each of the villages.  From now until July the katsina rituals and beliefs will be manifested in the lives of the Hopi.  The katsinam are ever-watchful spirit beings, the invisible forces of life and messengers who listen for humble prayers and meditations.  The immediate goal of the night dances is to create a pleasant atmosphere for all life forms, encourage their growth, and bring all-important rain for their fruitfulness. [Secakuku, 1995:34]

Barton Wright, in his book Kachinas a Hopi Artist’s Documentary, places this katsina in the Night Dances group, which, as he explains, are the dances held in the kivas in January before the arrival of the katsinas to Bean Dance in February. He states that at Third Mesa, puppet dances in the kiva feature the Salako and Palhikmana with the Water Serpent, but this is not done at First or Second Mesas. In these puppet dances, the Palhikmana is the maiden who grinds corn. [Wright, 1973:84]

“Kachinas have lives that are the same as any other Hopi, and consequently most of them have mothers, wives and sisters who accompany them when they are seen in ceremonies and dances.  These female kachinas are impersonated by men with one exception, the Pachavuin Mana.  In this one instance the impersonator is a woman. . . The men who take the impersonation of the kachina women in ceremonies do so by personal choice or the general accord of their kiva mates.  The decision is often based on the men’s small size or simply because they do an excellent job of impersonation.  There is never any onus attached to the role.” [Wright, 1977:44]

Condition: very good condition with one stepped section of the tablita broken off

Provenance: this Hopi Pueblo Palhikmana Katsina Maiden Doll is from a gentleman in Santa F