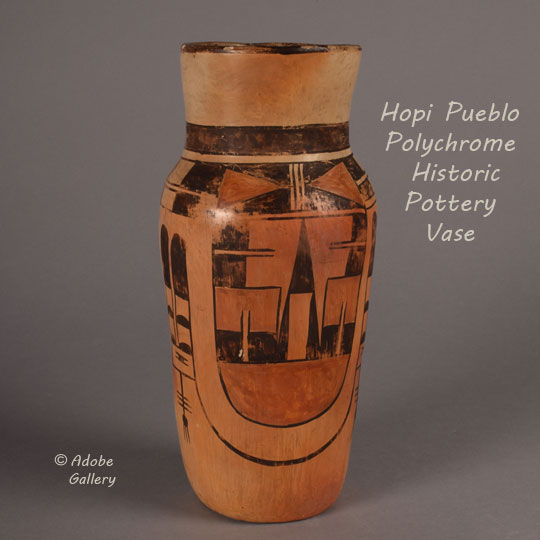 This historic Hopi Pueblo polychrome vase most likely dates to the first quarter of the twentieth century. While this particular example was likely made for sale, cylindrical vessels were indeed made for use at the pueblos long before a pottery market existed. A number of cylindrical pieces were discovered at Chaco Canyon, and it was determined that they had been used by their ancestral Puebloan makers for drinking chocolate (kakawa or cacao).

Its unique form is almost cylindrical, with a gently curved shoulder leading to a slightly slimmer neck. One can easily imagine this vase being converted to a lamp, as was popular during the mid-twentieth century, but this piece fortunately has not been altered in any way. The clay slip, which is nicely polished, varies quite a bit from a neutral cream tone to a warm orange. While some collectors might prefer uniform slip coloration, we would suggest that variation is beautiful, particularly on historic Hopi wares like this vase. The soft clouds of orange that appear here add depth and movement, enriching the visual appeal of the vase in a subtle, natural manner.

Painted designs in red and black adorn much of the exterior. The rim is painted black, and a second black band circles the bottom of the neck. A more complex band circles the shoulder. Larger designs cover the body in an elegant U-shaped composition, within and outside of which a variety of traditional Hopi elements appear.

Condition: good condition with some abrasion and pigment loss from handling