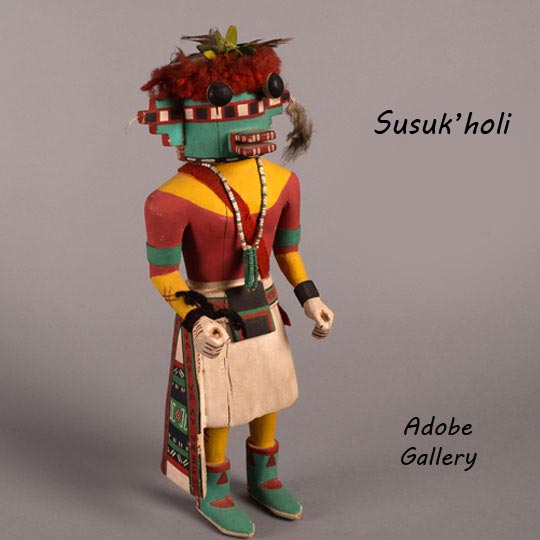 We published this katsina doll recently with information from Barton Wright's book Kachinas: a Hopi Artist Documentary and Harold S. Colton's book Hopi Kachina Dolls: with a Key to their Identification. Both books are considered authoritative, however, we have been informed by a knowledgeable source that, in this instance, both books are incorrect in identifying this katsina doll.

A few years ago, a group of Hopi from all Hopi villages met to compile an accurate list of all Hopi Katsinas. Unfortunately, this list has not been published, however we have been told that in consultation with a member of this study group, it has been stated that neither Tuskiapaya nor Sikyachantaka were valid names but were just passing references to events. He said that the actual name for both katsinas was Susuk'holi.

If one looks at a picture of the Holi katsina, the similarity to it and this doll is obvious.  We looked at the image presented on page 210 in Barton Wright's book, KACHINAS A Hopi Artist's Documentary.

Alph H. Secakuku, a Hopi author, published information about Susuk'holi in his book Following the Sun and Moon: Hopi Kachina Tradition. He stated:

Sikyatsungtaqa is known on Second Mesa as Susuk'holi. They are both messengers to the rain gods for the Hopi. They appear during Angk'wa and the summer katsina day dances. They get their name because of the markings on their mouths, and because of the arrangement of feathers worn as a headdress.

We are leaving the previous write up as we presented it. It makes for a better understanding of what the new information refers to. We accept the new designation for this doll.

The original information we published for this katsina doll follows:

There are two katsina dolls in published reference books that are very similar in the mask design.  The descriptions of the two dolls as listed in Colton are:

Sikya-chantaka (Flowers or Guts in the Snow): Green case mask, black band with white squares across the eyes, band outlined with red; pop eyes, red ears, mouth square with painted teeth (may or may not be built out), white feathers on top of head.  Kilt, sash, green moccasins.  Body painted red with yellow shoulders, forearms, and legs.

The two are quite similar in description, so we made the decision based on the stepped element ears, that this is Tuskiapaya - Crazy Rattle Katsina.  Others may disagree with our choice.

What is unusual about this doll is the cactus-like element on his head.  Neither description above mentions such an element.  I do not think they are meant to represent feathers as there are real feathers on his head.  Colton does not describe what the katsina might carry in his hands.  In Barton Wright, the painting shows a rattle in the right hand and a bow in the left.  This carving has nothing in either hand.  The picture in Wright illustrates a red ribbon bandana across the chest and a turquoise necklace with jaclas around his neck.  This doll has both.  Jaclas means ear strings. They were originally made to be worn as earrings. Later, they became an addition to what is considered to be the most traditional form of pueblo necklace.

It appears likely that the carver perhaps used the Barton Wright book as guidance.  Wright placed the two katsinas side-by-side in his book (pp. 208 and 209).  Colton’s descriptions are listed as katsina #253 and #258.

Condition: good condition with splits in the wood from the face to the bottom of the kilt.  Very minor paint abrasions.

Provenance: this Susuk'holi Katsina Doll, Hopi Pueblo Kachina Doll is from the collection of a gentleman from California