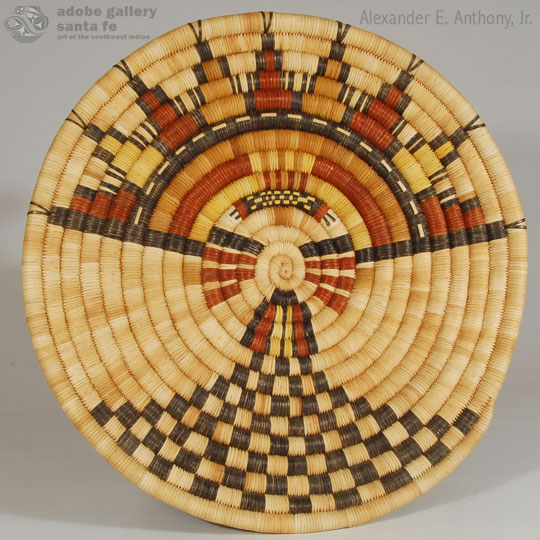 The Hopi Salako Katsinas—male and female—appear during the Salako Ceremony, a ceremony that is held very infrequently, maybe every decade or so.  The katsinas are brought into position by Eototo and Hahai-i-Wuhti, and specific locations are marked as circles of cornmeal by Eototo. The male and female Salako Katsinas rest in these circles bowing and dipping until beckoned to another set of circles by Hahai-i-Wuhti.  They advance one at a time to their new positions.

Sotuknongu and the Tukwinong with their ceremonial gourds of water and trays of varicolored cornmeal flank the pair.  The basic intent is probably that of bringing the cloud supernatural beings to the Hopi mesas and causing them to remain in the general vicinity of the villages and fields of the tribal lands.  -Wright 1973

Example image of how a Hopi coiled basket is made from grasses and yucca. →

This plaque still has attached the Hopi Arts & Crafts tag with the weaver’s name. →

Provenance: from a client from Tulsa, Oklahoma 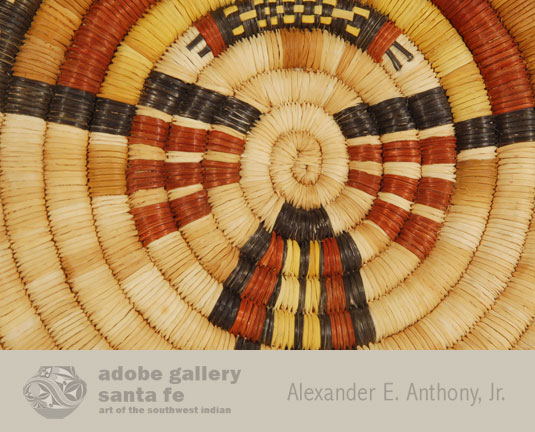