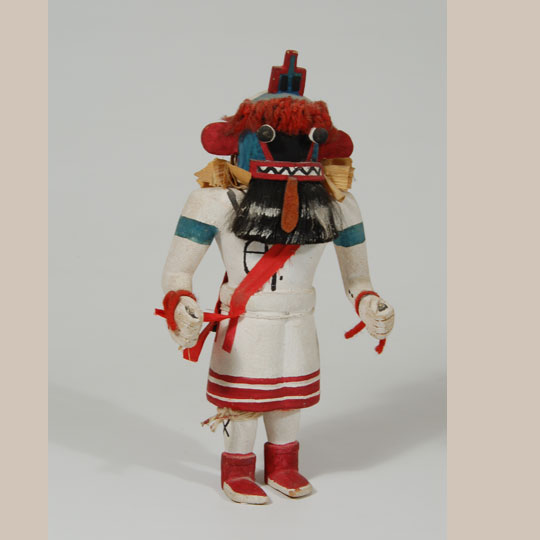 The Bean Dance is properly called the Powamu and it is one of the most important of the Hopi ceremonies.  Powamu occurs in February each year in most of the Hopi villages.  A most important aspect of this ceremony is the anticipation of the coming growing season, with ritual designed to promote fertility and germination.  To accomplish this the Powamu chief appears as Muyingwa, the principal deity of germination, and every male who has been initiated into the katsina cult is expected to grow beans in the kivas.  Growing bean sprouts gives the ceremony its popular name, and offers omens for the success of the coming growing season. The procession of the Pachavumanas carrying these bean sprouts and the presentation of ritual bundles of them to the women and children during the heights of the winter are tangible evidence of the presence of Muyingwa. Wright, 1973, p17.

A number of different katsinas participate in the Bean Dance ceremonies.  This katsina, Silkafragoingtaqa, is one of the Bean Dance participants.  The doll appears to be circa 1940s, before the advent of acrylic paints.  He wears a neck ruff formed from corn husks, has a hair beard, yarn on his forehead and a short tableta on his head.  His torso is painted to resemble a white shirt with a pocket.

Provenance: from the collection of an Oregon family