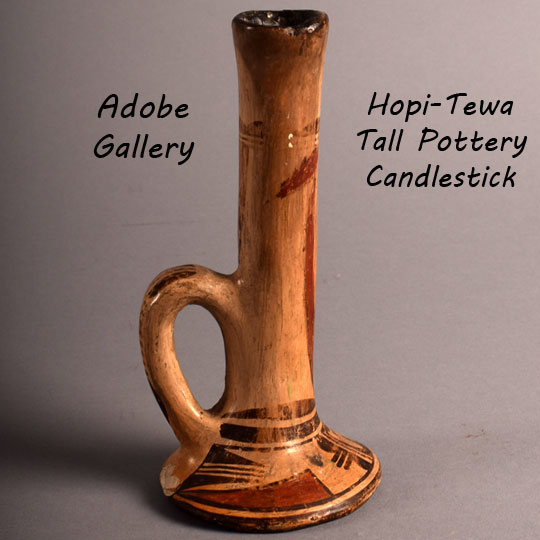 This pottery candlestick, by an unidentified Hopi-Tewa potter, is tall and slim, and has a handle for comfort in holding.  It has a simple and elegant design on the tall stem, composed of two outer curved red lines which contain slim brown pigment interior lines.  The pedestal has traditional Hopi-Tewa pottery designs.  There is a band of clouds an inch below the top; a repeat of the design, excluding red, on the stem; and a similar design on the handle.

The candlestick appears to date to the early twentieth century, perhaps circa 1930s.  It was not signed with the name of a potter.

Candlestick production at New Mexico Pueblos possibly originated when the Franciscans requested them for use in the churches. They could have started as early as the late 1500s, but probably originated much later. At first, candlesticks brought from Spain were used, but eventually might have been replaced by pottery ones created by pueblo potters.  At Hopi, they likely were the invention of Thomas V. Keam, the local trader on the reservation.  He constantly requested of the potters that they make items familiar to the tourists visiting the mesas.  Candlesticks would have been a popular item for the tourist trade.

Condition: good condition with a minor chip in the pedestal below the handle (see below).

Provenance: fthis Hopi-Tewa Tall Pottery Candlestick with Finger Holder is rom the estate of Henry Christensen, former attorney at law of New York, who purchased this from us in 2003.