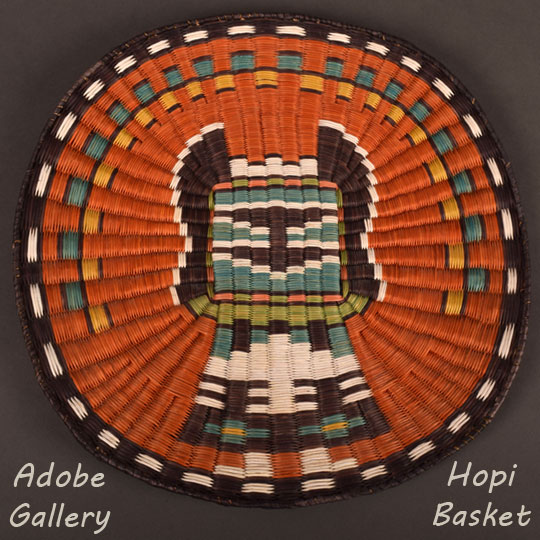 This wicker basketry plaque came from the hands of Hopi Third Mesa weaver Clara Sekayesva.  Its central design element is a Crow Mother katsina.  She is surrounded by a wide band of colorful patterns, a black and white checkerboard rim band, and a black rim.  In the early days, these bright colors were produced using a complex and time-consuming vegetal dye method.  A wide variety of beans, seeds and flowers were used.  Clay and coal were used to create white and black.  Later, the weavers began using aniline dyes.  They’d usually obtain these dyes from the traders who purchased their work.

This Crow Mother piece is an excellent example of wicker basketry.  It is sturdy, tightly woven, and in excellent condition many years after its creation.  Its colors stand out as particularly bright and appealing, and its design is uniquely stylish.

This basket is pictured in the hands of the artist on page 72 of Gregory Schaaf’s American Indian Baskets I, 1,500 Artist Biographies. Clara is also mentioned in Helga Teiwes’ book Hopi Basket Weavers: Artistry in Natural Fibers, on page 74, with an illustration of a fruit basket made by her.

Clara Sekayesva is a Hopi from the village of Hotevilla, Third Mesa.  In Greg Schaaf’s book, American Indian Baskets I, 1,500 Artist Biographies, (p.72), he states “Clara Sekayesva is a master wicker basketmaker.  In the 1940s, Dr. & Mrs. Harold Colton of the Museum of Northern Arizona employed Clara and her husband.  She has been a consistent award winner at the museum’s annual Hopi Show.”

Early collections of wicker baskets, such as the Second Hemenway Expedition In the late 1880s, consisted of 100 such baskets, of smaller sizes and not very colorful geometric designs.  There was only one of the 100 plaques with a katsina image and it was of a Crow Mother.

It is credited to trader Thomas Keam the development of more colorful plaques and with a variety of imagery, including those of katsinas.  His trading post on the Hopi reservation was the center of commerce and he needed pottery, katsina dolls and basketry to satisfy the needs of the public.