The Hopi have preserved their culture in a more traditional form than many other Native tribes in the United States.  The men have continued their reenactment of the roles of the Katsina in Hopi life and the women have continued to practice the art of basketry for its original intent.

We, as outsiders, see Hopi plaques as decorative objects made to sell to tourists and collectors but that is only a secondary and recent purpose.  The plaques have served to retain Hopi culture and the women are responsible for this occurrence.  It is the females who laboriously gather the materials, process them through sun drying, preparing the dyes and dying the wicker and then, as a last step, weaving the plaque.  It is the plaque that symbolizes the woman’s role in Hopi culture as it is the reenactment of the Katsina dances that reinforces the role of the men.

Plaques are actually used for serving food but more importantly plaques serve a Hopi from birth to death.  A plaque is presented to a newborn baby for play and for keeps for the rest of its life.  At Bean Dance, the Katsinas present young mothers with plaques with bean sprouts attached as a sign of renewed life and continuation.  Interestingly, the first plaque given to a young girl has a sunflower design. Later in life, the first plaque she makes will feature the same sunflower design.  This tradition is a reflection of the continuation of life.

A wedding plaque is given the man in preparation for his wedding and this plaque is never to be sold because it is his property and is of great importance to him.  The man’s family made all the bride’s wedding clothing, as weaving at Hopi is done by men.  The wife’s family pays back the groom’s with plaques which may be sold for reimbursement, except for the one presented to the groom.  The design is the same as the first plaque presented to him as an infant, showing a continuation of life.

Older plaques were dyed with natural dyes from nature but today’s plaques feature commercial dyes which tend to fade.  Fewer colors were used in older plaques.  On first examination, this plaque appears to be one of the older ones in which natural dyes were used. If one were to turn the plaque over, however, there is a significant discovery—the plaque reeds were dyed with commercial dyes and those strong colors have faded to such mellow colors seen on the front side.  This is one of the most extreme examples of fading with pleasing results.  The front is such a beautiful palette.  The plaque probably dates to circa 1940s.

Hopi basket weaving is a laborious process entailing gathering of materials at the proper time of year and processing those materials so they are useable for weaving. Each willow reed must be dyed in colors appropriate for the design that is to be used.  Many collectors and tourists are reluctant to pay a decent price consistent with the amount of work by the weaver.  It is important that buyers understand the efforts involved and compensate the weaver for her work.

Condition: very good condition with fading as noted above

Provenance: from a client in Colorado 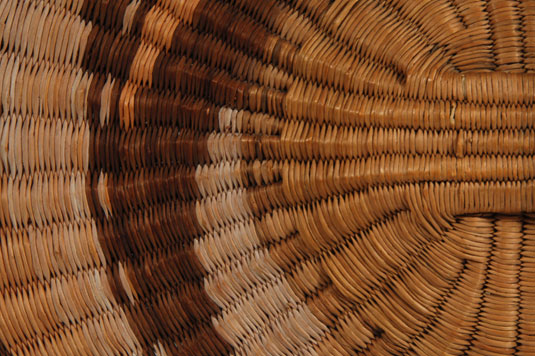