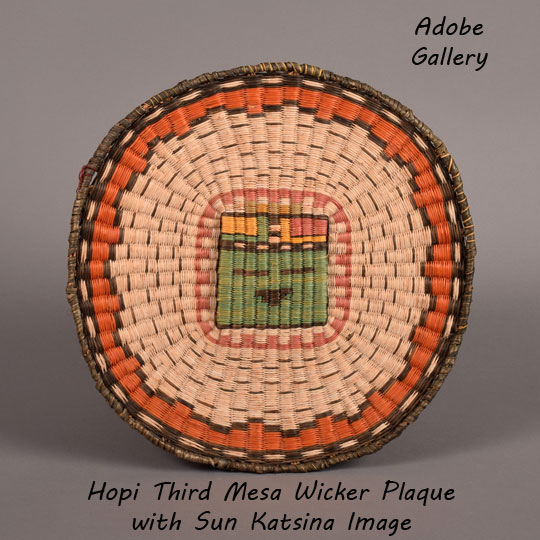 This Third Mesa Hopi wicker plaque features the imagery of a Hopi katsina.  Comparing the plaque with a published example, it appears that this could be an image of Tawa, the Sun katsina.  The description of the published one:

“The face is surrounded by radiating spikes of alternating colors.  A dark vertical line bisects the upper portion of his face, and a dark horizontal line separates the bottom two-thirds of his face, forming two differently colored forehead designs.  He has rectangular eyes and an inverted triangle mouth.” [Finger & Finger, 2006:91]

The only difference between the published example and this plaque is with the rays emanating from the face, which are white with black lines rather than “radiating spokes of alternating colors.”  The other descriptions fit well.  This plaque has a pink circle around the face, as does the published one, and there is a wide orange circle near the rim of both examples.  The only item in question is the green used for the katsina’s face.  We would expect a yellow face, as representative of the Sun.

The Hopi name for a plaque like this one is Yungyapu.  These plaques are usually made of rabbit brush, dunebroom and yucca.  Dunebroom sticks serve as the warp element.  They are wrapped tightly with rabbit brush, which serves as the weft element.  Yucca strips, usually dyed black, are wrapped around the rim.  Scrub sumac and arroyo willow are also used for baskets like this.  Adobe Gallery lists rabbitbrush, dunebroom, and yucca as the medium because our reference materials position these three plants as those most used in wicker basketry.

Provenance: this Hopi Pueblo Third Mesa Wicker Plaque with Sun Katsina Image is from the large collection of a gentleman from California