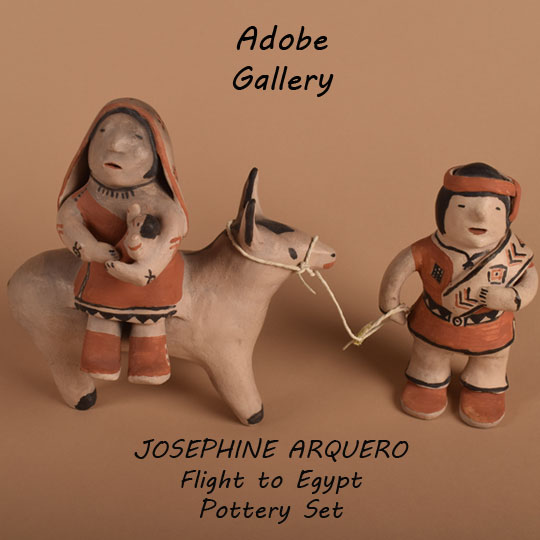 This Cochiti Pueblo pottery figurine set by Josephine Arquero has all the attributes of pure Folk Art.  Mary is precariously sitting on the edge of the donkey and Joseph and the donkey are about the same size.  It is charming in these respects.  Joseph has the reins in his hand, reins made from a stripped and dried yucca leaf.  He is wearing pueblo-style clothing and has a blanket draped over his shoulder.  Mary, too, is dressed in pueblo style with a shawl draped over her head.  She is holding Baby Jesus.  The  figure is signed. It was purchased from the artist in April 1982 and sold to the client from whom we now have it back.

The figurine pair represents the Holy Family’s flight to Egypt, the story as recounted in the Gospel of Matthew and in the New Testament. Soon after the visit by the Magi, an angel appeared to Joseph in a dream telling him to flee to Egypt with Mary and the infant Jesus since King Herod would seek the child to kill him.