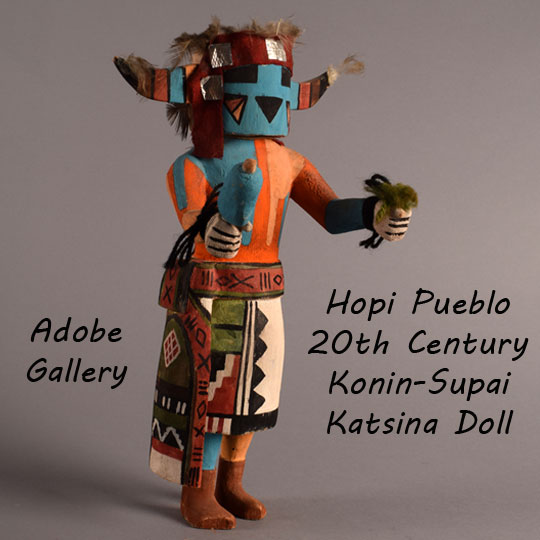 This cottonwood carving represents the Third Mesa version of the Konin Katsina.  In his book, Hopi Kachina Dolls, Harold S. Colton presents several pages with categories of katsina dolls with two horns—mask with a beard; mask with a snout; and mask with no snout or beard.  The only two katsina dolls in the third category are both Supai Katsina—one representing First and Second Mesas, and one representing Third Mesa—the difference being the arrangement of colors around the mouth.

At Third Mesa, Colton states that the colors around the mouth are stepped rectangles of many colors placed over the mouth.  Additionally, he shows the Konin Katsina and Supai Katsina as a single entry, an indication that the two are the same katsina with different names.  Both of those represent the Havasupai Indians at the Grand Canyon.  Colton also states that both Supai and Konin have a white face.

This version of the Konin Katsina has a blue face and the colors are embedded in triangles on its cheeks, rather than in an arch of small squares over the mouth.  There is a section on the kilt and sash that appears to have been painted with green mineral paint, but the remainder of the doll has been painted with traditional water-based paint.

It is not unusual for a carver to make changes in features and colors when making a doll that is to be offered for sale.  Doing so would eliminate violating any taboo on dolls to be sold to non-Hopi buyers.

Provenance: this Hopi Pueblo Twentieth Century Konin-Supai Katsina Doll is from the collection of a gentleman from California

Reference: Hopi Kachina Dolls with a Key to their Identification by Harold S. Colton