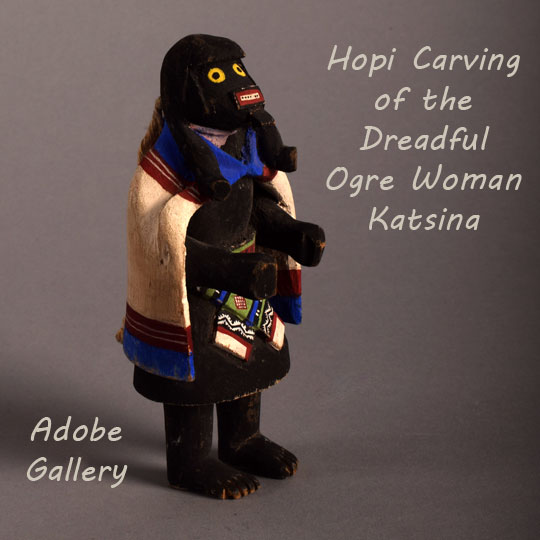 There are several Hopi katsinas that have a look similar to each other—Soyok Mana, Soyok Wuhti, Chakwaina Sho-adta (or Chakwaina Mana), Awatovi Soyok Wuhti, and Hé-é-e.  This carving is not exactly like any of those as published in Barton Wright’s or Colton’s books.  Yet, all of them seem to be a variant of the general classification of Soyok Katsina.

According to Colton, “Hé-é-e is a male katsina wearing women's clothing. At Second Mesa Hé-é-e is supposed to be the spirit of a young man, who, while changing clothes with his bride in a corn field, was half dressed when he spied enemies approaching his village.  Retreating to his village he rallied the defenders which led to the defeat of the enemy.  His hair was only arranged like a woman’s on one side, and he wore pants under his dress.  At Oraibi the story is different. Hé-é-e is a young woman who was interrupted, while her mother was fixing her hair, by an attack on the village.  She rallied the men and defeated the enemy.” Colton 1959:25

If we assume this carving is of Soyoko—an Ogre Woman—who appears in the evening after the Bean Dance, then she has a different function. “Appearing in the company of her towering brothers, the Nataska Mana or Soyok Mana comes during the Powamu ceremony.  Usually, she will be found close to Nataska’s Uncle, and when food is offered to her that does not satisfy the Ogre’s wants, she whistles in disapproval.  She carries only the large burden basket into which she puts any acceptable food.” Wright 1973:77

If we proceed to check out Chakwaina Sho-adta, we find that she is the same as Chakwaina Mana, and that she “is the ‘grandmother’ of the Chakwaina Clan, their old war chief and also clan ancient.  Her story is exactly the same as that of Hé-é-e, in that in a state of undress she managed to help turn the enemy and was consequently made a kachina.  Her appearance is also that of Hé-é-e with very minor differences, and she cannot be differentiated except by context.  She appears with the Chakwaina when they dance.” Wright 1973:100

Another similarly dressed katsina is Soyok Wuhti.  “The awesome figure of the Monster Woman appears during the Powamu ceremony as one of the many Soyoko who threaten the lives of the children.  Dressed all in black, with long straggling hair, staring eyes and a wide fanged mouth, she carries a blood-smeared knife and a long jangling crook— a truly fearsome creature to the children.” Wright 1973:74

Regardless of the classification one places on this carving, she is certainly one of the Ogre katsinas, and she was beautifully carved.  She has her head turned upwards in more of an innocent or pleading manner, rather than in the fearful manner she is supposed to represent.  The carving is small and wonderful.

Provenance: from the extensive collection of a client from California

- Colton, Harold S. Hopi Kachina Dolls with a Key to their Identification