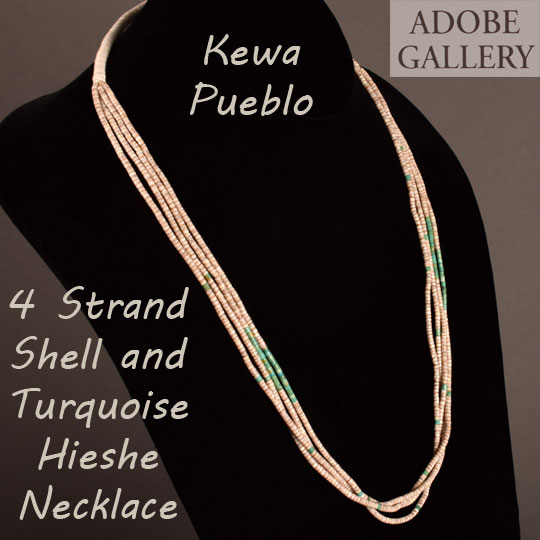 This four-strand Kewa necklace consists of sea shell and turquoise that have been cut, drilled, sanded and strung as a necklace.  It is a necklace from the 1970s but has recently been re-strung and finished at the back end with a pueblo wrap. It was originally strung on cotton thread with a pueblo wrap, but the cotton broke in several places so it has been strung for comfortable and long-term wear.  What is a Pueblo Wrap? It is a string wrapped around and coiled tightly - usually used in necklaces to secure them (see image below).

The creation of fine hieshe is a long and difficult process. After cutting the sea shell into small squares and drilling a hole in the center of each, the same is done with the turquoise.  Once these squares are strung together, they are laboriously sanded to a consistent round shape. Many Kewa artists recount stories from their childhood describing hours of sanding heishi for their elders. When the beads are sanded smoothly, they are then polished on a turning leather belt. The result is a necklace that hangs with a graceful flow.

Many hours were put into the creation of this four-strand turquoise and shell necklace. The artist randomly interspersed turquoise beads within the strands of cream colored shell. The four strands are wrapped together in a pueblo wrap.

Kewa Pueblo (formerly known as Santo Domingo Pueblo) is located approximately halfway between Santa Fe and Albuquerque along the Rio Grande. One of the first pueblos visited by the Spanish in the late 16th Century, residents have maintained many of their traditional practices. In addition to agriculture, the pueblo has a long history of producing, trading and selling pottery and jewelry.  Today, jewelry artists at Kewa are known for their use of shell and gemstones to create beads called hieshe.

Provenance: The necklace is from the collection of the daughter of the Balcomb family who owned galleries in New Mexico and Arizona.

Recommended Reading: Indian Jewelry of the American Southwest by Sarah Peabody and William A. Turnbaugh

HOW TO INVEST IN INDIAN JEWELRY [SOLD]
by