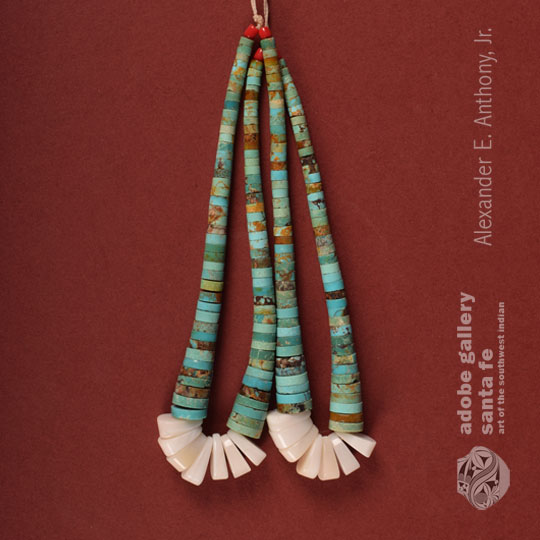 Jaclas are comprised of two loops of turquoise and shell strung individually and then tied together in a fashion by which they can be hung from a nugget necklace.  Originally, in the 19th century, each of the units was made for use as earrings.  When not being worn, they were hung on a nugget necklace for storage.  Eventually, their use as earrings ceased and their use as a pendant on a necklace became permanent.

Historic photographs show necklaces with jaclas hung over the neck of a deer mounted on one’s wall.  When the dancer was not wearing the jewelry, it would then be hung around the deer’s neck.  It is not unusual to see necklaces such as these still being hung around the neck of a mounted deer in a pueblo home.  It is a sign of respect for the deer.

Condition: these Kewa Pueblo Turquoise and Shell Jaclas by Tina Montoya are new

Provenance: made by and purchased from Tina Montoya of Kewa Pueblo

Recommended Reading:  The TURQUOISE by Joseph E. Pogue, Memoirs of the National Academy of Sciences, 1915.  Re-published by The Rio Grande Press, Inc. 1974.