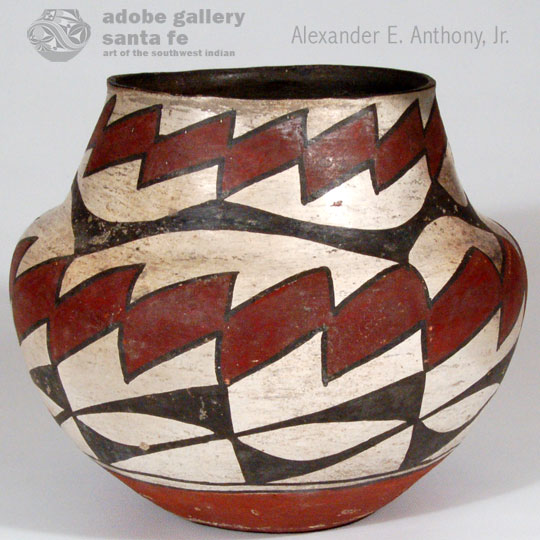 In the late 1800s and early 1900s, it appears that Laguna Pueblo potters developed designs that were bold and visually striking.  It was perhaps an influence of the arrival of the *AT&SF train that entered New Mexico in 1879 and made daily stops at Laguna Pueblo, allowing potters from Acoma and Laguna to sell directly to passengers.

OLLAs from this period were made in smaller sizes to accommodate traveler’s handling on the train.  This historic pottery jar, for example, is a perfect one to illustrate what was happening at the time. The size is smaller than normally made for pueblo use, although it has been stated that such small jars were used as training devices for young girls to practice walking with one on their head.  I would suspect that such training OLLAs would not be decorated so beautifully because of their possibly being broken.

The elements of design— tilted rectangles in black with a white line running through the center—were often used at Laguna.  The Laguna potter of this jar retained the tilted rectangles but she outlined each in black and filled each with a rich dark red pigment, a pigment supposedly not used much after circa 1900.

Another Laguna trait retained in this potter’s work is the sparse design.  Acoma potters were known for filling practically every square inch with design, whereas Laguna potters left more open space.  In this jar, the open space makes the dark red stand out more prominently against the while slip. The added black designs enhance the black outlines of the red rectangles.

Overall, the talented and creative potter achieved a beautifully rich and expressive design with minimal design elements.  This is just one clue of her artistic excellence.

Provenance: from the Southwest Indian Pottery collection of a gentleman from Albuquerque 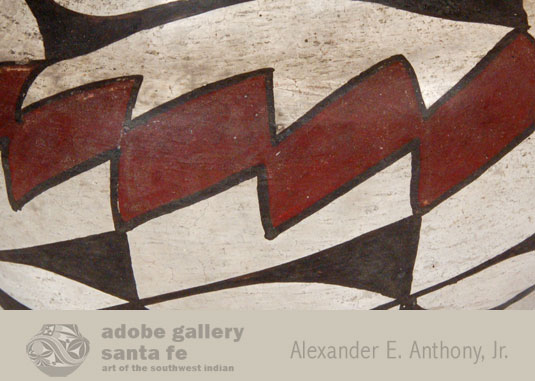