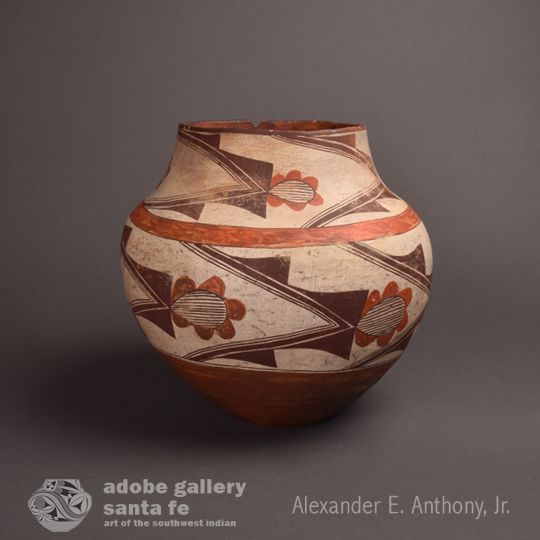 Laguna Pueblo was the recipient of refugees from several other pueblos during the late 17th century, a result of the Pueblo Revolt. The pueblo even accepted Hispanics and Anglos as well as other pueblo Indians because strength of force against the Spanish invaders was important. The non-Indian population of Laguna tripled between 1860 and 1870. Dillingham 1992

Not only did Laguna accept non-Indians to live in the pueblo, it also adopted non-Indian design concepts for its pottery, a trend that continued through the 19th and early 20th centuries.  The Santa Fe Trail brought fabric and other objects that were completely foreign to Native populations.  Crewel work and Pennsylvania Dutch pottery brought new designs that appealed to New Mexicans.  These designs can be seen in pottery from Acoma, Laguna and Zia Pueblos.  These designs may have worked their way from imported items adopted by Spanish households for colcha embroidery and then seen and adopted by potters for their pottery designs.

Innovative potters at Laguna Pueblo combined these new designs with their traditional designs, picking the finest of the two.  The result was a fresh and creative product, as expressed in this jar.  The design on this jar is minimalist in concept.  There are two basic elements—the fan-like design and the arrow-head features.  The neck layout and main body layout are the same, the neck design in smaller scale.  Simple and elegant are good descriptions for this jar.

Condition:  this Laguna Pueblo Historic Polychrome Pottery OLLA is in very good condition with some minor abrasion and a small V-shape rim chip.