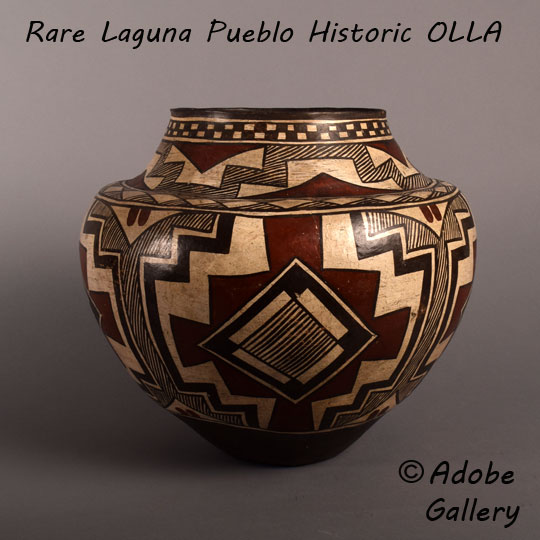 This OLLA’s primary element, which repeats four times around the exterior, sets a diamond within a diamond. A stair stepped pattern surrounds this form in a gorgeous maroon tone. White and then black follow, expanding the design further horizontally. A thin band of triangular forms appears on the shoulder. Above it, a wider band appears, referencing the primary design band and treating the viewer to more of the rich maroon pigment. A thin band with a checkerboard pattern circles the olla just below its black rim.

Remarkably, the potter’s choice to create a complex web of straight lines and right angles does not feel severe or rigid.  Rather, it flows as freely and naturally as any fine Acoma Pueblo pottery vessel, despite sacrificing the loose fluidity of Acoma’s linked, rounded patterns in favor of strong corners and bold geometric forms.

The water jar’s form is similarly strong. It is well-balanced, with the slight variations that are typical of works from this period. The shoulder’s sharp turn inward has a Zuni Pueblo look to it, as does the darkened base, but there is little else here to suggest anyone other than a Laguna Pueblo potter. Everything about this piece is big and bold, but that strength does not come at the expense of elegance or sophistication as it might with the work of a less experienced potter. This is a very rare, exceptional example of fine historic Laguna Pueblo pottery.

Condition: excellent condition for its age. A thin crack has been stabilized, and a small amount of overpaint appears in one area near the stabilized crack. EARS OF CORN: LISTEN [SOLD]
by