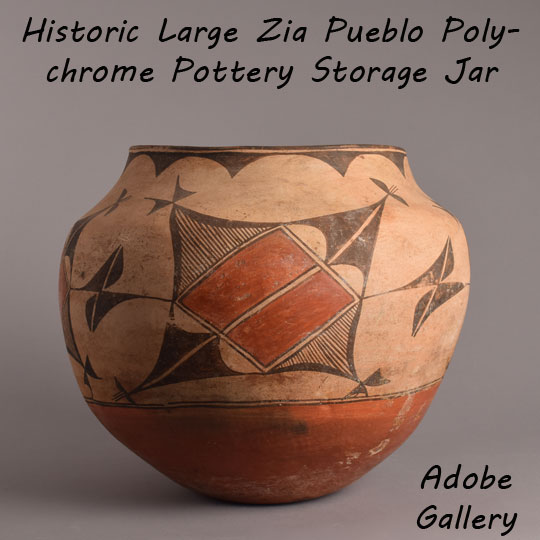 This is an excellent historic polychrome pottery storage jar that dates to the last decades of the nineteenth century (circa 1880-1900), as evidenced by the overall form: the high shoulder, typical of pieces created in that period, the stone polished underbody of the vessel, as well as the traditional red banding at the top of the underbody which measures about 1-½ inches, which fell into disuse around circa 1930.  Another clue is the lack of Zia Pueblo birds in the decoration. The base is flat as is typical of storage jars.

The historic pottery vessel was constructed of typical Zia basaltic black lava as paste-temper with the traditional polished red band on the interior neck and a black rim top.  Interestingly, there is no ceremonial line break in the framing line at the rim and in the lower of the pair of framing lines below the design area, however, the triangular design band at the neck and the top of the pair of lower framing lines do have ceremonial line breaks.

The design elements are faithful to the traditionally conservative Zia design system, which itself was relatively unchanged by influences of Western ideas.  The design is less complicated than those on later vessels. The large floating square elements with interior orange rectangles and attached cloud elements on all four sides easily identify this as a nineteenth-century jar. Such simple designs gave way to Zia birds and overall fuller surface coverage in the early twentieth century.

This is truly a very masterful jar, with its massive size and depth and nuance to the design, a sense of space and simplicity suggestive of the golden age of Zia pottery. It displays a fine patina acquired through use.

Condition: this Historic Large Zia Pueblo Polychrome Pottery Storage Jar is in very good condition with minor abrasions to surface paint due to continued use. There is one vertical crack, which has been stabilized and concealed by a professional restoration artist.

Provenance: from the collection of a gentleman from Albuquerque