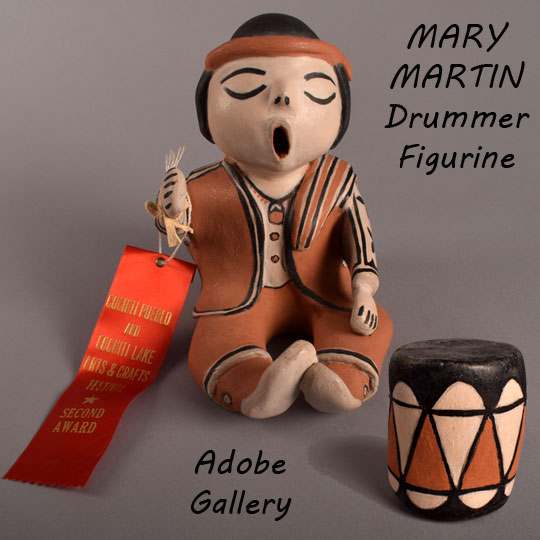 This drummer by Cochiti Pueblo artist Mary Martin is elaborately dressed in a beautiful painted vest with a striped blanket hanging over his shoulder.  His vest and pants are outlined on the edges with black and white stripes.  He has a buttoned shirt and a shell necklace.  In the position he is sitting, it appears he has bowed legs.  His pottery drum, which is a separate piece, rests in his lap.  He had a drumstick previously, but it is no longer available.  His vest is decorated on the back with rain clouds and crossed arrows, and on the arms with floral designs.

This figurine was entered in competition at the Cochiti Pueblo and Cochiti Lake Arts & Crafts Festival in October 1981 and was awarded a Second Award ribbon.  Adobe Gallery purchased this from the potter in 1981 and sold it to the client from whom we now have it back. Except for the loss of his drumstick, the figurine is in original condition.  The award ribbon accompanies the figurine.