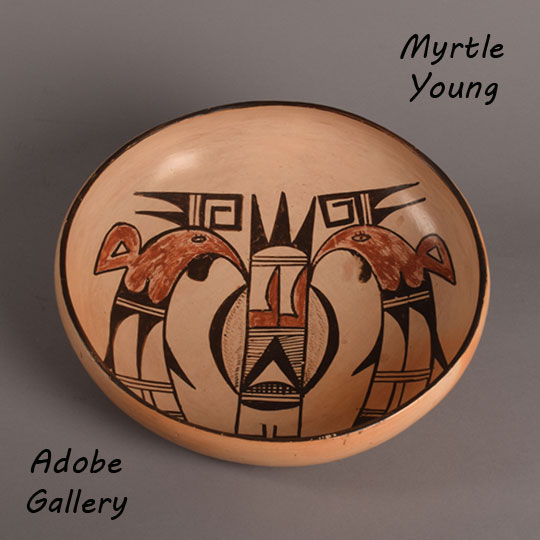 Every element of this Hopi bowl stands out from the rest.  Only by its shape and the slope of its curve do we recognize its origin.  Myrtle Young stylized the classic elements by blending ancient Sikyátki pictorials with a large, open-faced bowl.  The crisp black rim is also a contemporary addition to an otherwise historic design.  This bowl features two birds, most likely parrots, facing one another and joined by a central two-legged figure.  If looked at in another way, the birds become wings for the central figure, spanning outward and creating a singular being.  However one chooses to see this piece, it’s large size and graceful precision make it one of a kind.

Myrtle Young was a sister of Garnet Pavatea and was truly an outstanding potter. She frequently made large piki bowls and seemed to always achieve thin walls on her vessels.  This bowl is large, well made, and extremely thin-walled—thinner than most Hopi-Tewa pieces.

The name of the potter is not on the bowl.  It has been attributed to Myrtle Young based on documented similar ones signed by her.

Condition:very good condition with small abrasions to the slip on the bowl’s interior

Provenance: this Myrtle Young Hopi Polychrome Large Open-faced Bowl with Parrots is from the estate of Henry Christensen III, former attorney at law of New York City, to whom we sold this in 2006