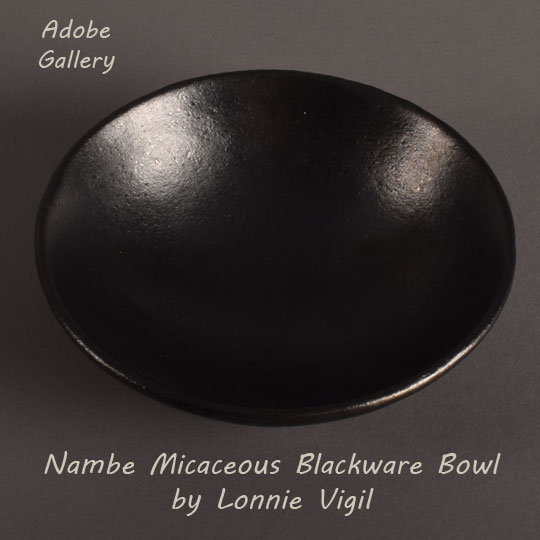 This small pottery bowl was made by Nambe Pueblo artist Lonnie Vigil.  It is a fine piece of micaceous blackware.  It is thin, lightweight, and modest in size, but quite impressive regardless of its scale.  The clay’s natural beauty is what catches the eye with a piece like this one.  It reflects light in a soft and subtle way, revealing the texture of the clay and the sparkle of the mica.  Vigil shaped the clay into a small, shallow bowl—a simple form that suits the clay perfectly.

The bottom of the bowl is signed Vigil / Nanbe.  Included with purchase is a photograph of Vigil holding this bowl.

Lonnie Vigil (1949- ) grew up at Nambé Pueblo in New Mexico. He began his career as a financial and business consultant in New Mexico and Washington, D.C. after earning a business degree from Eastern New Mexico University. But by the early 1980s, he began to realize that his life in Washington gave him "nothing to feed his soul." A performance called "Night of the First Americans" at the Kennedy Center in Washington, D.C. inspired him to return to New Mexico, where he began working exclusively as a micaceous clay potter.  Like many contemporary ceramic artists in the American Southwest, Vigil preserves the traditions of his culture while pursuing his own creative initiatives. His artworks reflect the style of his ancestors—hand-built forms used for cooking and storage. He attributes his success as an artist to the guidance of his great-grandmother, Perfilia Anaya Peña, and great-aunts, who are also potters. For him, each instance of making a pot is an encounter with Earth Mother and with his Nambe Pueblo ancestors who worked the clay before him. He believes that each pot "speaks to the continuity in the identity of family and community," but is simultaneously an act of connection between the potter, the Earth Mother, and the ancestral spirits that guide them.

Provenance: this Nambe Pueblo Micaceous Blackware Pottery Bowl by Lonnie Vigil is from the collection of a New Mexico resident, originally purchased from the artist

All That Glitters: The Emergence of Native American Micaceous Art Pottery in Northern New Mexico [Paperback Edition]
by Duane Anderson