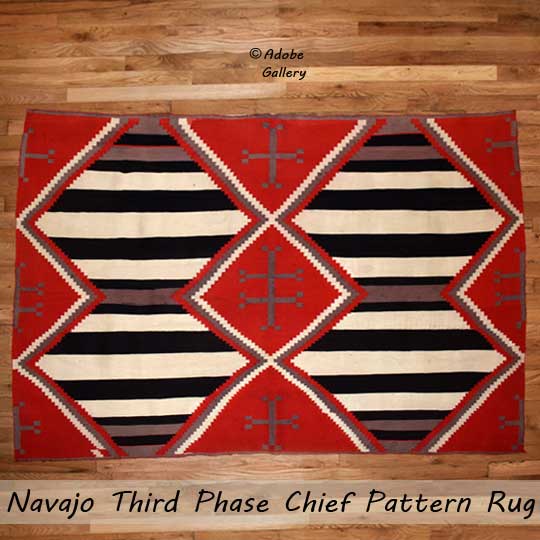 This textile is classified as a Third Phase Chief Blanket pattern. This is a pattern that has morphed from earlier textiles. The oldest blanket known to have survived is the one found in Massacre Cave that dates to c.1800. It is a fragment that clearly illustrates a banded pattern like the black, white, ansimilar d purple of this Third Phase one.

This textile features the pattern of a Third Phase Chief blanket but was woven in a larger size for use as a floor rug. The black and white bands are traditional from the first version of the Chief blanket. The purple bands and narrow red bands are from a second version of the style. Lastly, the red diamonds are from the style of the Third Phase blanket. This rug dates to the early 1900s

Chief blankets progressed through several phases, designated as First Phase (c.1800-1850), Second Phase (1850-1865), and Third Phase (1865-present)-each displaying enlarged design patterns. There is some uncertainty regarding the Chief blanket nomenclature. There were no chiefs in the Diné culture. It is speculated that the name derived from the Plains Indians who proudly wore the First Phase blankets they had traded from the Navajo. Trade items included horses, silver, or other items of interest to the Diné. The First Phase blankets were the most in demand in the 1800s of all Navajo weavings.

The First Phase blanket was the earliest style and consisted of brown or blue bands alternating with white bands. This style was like the striped shoulder blankets that the Diné had been weaving for a hundred years. The Chief blankets were woven wider than long, and this has continued since; the only textile woven in this manner. The First Phase blankets were of a finer weave than other wearing blankets because of their popularity with the Plains Indians.

The Second Phase blankets incorporated small amounts of red yarn in the design. The source of the red yarn was commercial cloth which the weaver raveled and reused. Since the commercial yarn was a tighter spin, the weaver then spun her yarn tighter so there was no visible discrepancy in the finished textile. This resulted in a superior finished product.

The Third Phase blanket developed at a time of distress for the United States government as well as for the Diné. Mexico had won its independence from Spain in 1821, and then lost territory to the United States a couple years later, at which time the new government decided it was time to take care of the "Navajo problem." That so-called problem was the Navajo raiding in Mexico and later in the new government partially to recapture Navajo who had been captured and were slaves in Mexican and New Mexican homes. The government's solution to the problem was to capture the Navajo and relocate them to the southern part of New Mexico, known as Bosque Redondo. For four years, the Navajo were enslaved. There was nothing for them to do. The women had lost their sheep so they could no longer weave blankets for themselves or for trade. Eventually, someone in the government wised up and began importing commercially made yarn for the women. These yarns were mostly acquired by the government from commercial sources in Germantown, Pennsylvania, resulting in those weavings becoming known as Germantown weavings.

It was during this time in the mid-1860s that the Third Phase blanket was created. Having become accustomed to using commercial yarn, the women wished to continue doing so after they were released from Bosque Redondo and allowed to return to a smaller area of their previous lands. Commercial yarn came in more colors and varieties than available previous home spun yarns. The use of red yarn increased and is evident in Third Phase blankets where large sections were devoted to red designs as if superimposed over the First Phase bands of white and brown.

Once relocated to a reservation, the Navajo were forced by convenience to trade with the government Indian traders being established nearby. These reservation traders were more sympathetic to the needs of the Navajo than prior government personnel. It was the traders who convinced the women to convert their blanket weaving to floor rugs for which the traders would find a market in non-Indian homes.

The Third Phase pattern was a survivor of this conversion. The change from blanket to rug was basically in its size. Weavers were encouraged to increase the size of their looms and weave larger textiles suitable for use on the floor. Early Indian traders on the Navajo Reservation deserve credit for the existence of Navajo rugs for today's market.

Warp and Weft:  "All twill weaves are produced by floating the weft elements over more than one warp at a time to create a raised pattern of color and texture. Three twill-weave techniques were used by both Navajo and Pueblo weavers: plain twill forming diagonal floats; herringbone twill, in which the diagonal floats alternate direction to form a vertical zigzag or chevron pattern; and a diamond twill, in which the herringbone patterns are woven in such a manner as to create concentric diamond patterns." Kaufman and Selser, 1985:138

Condition: very good condition after being professionally washed and repaired. There are still some stains but nothing of significance.

Provenance: this Navajo Third Phase Chief Pattern Rug c.1900 is from the estate of a former resident of New Mexico WALK IN BEAUTY The Navajo and Their Blankets [SOLD]
by