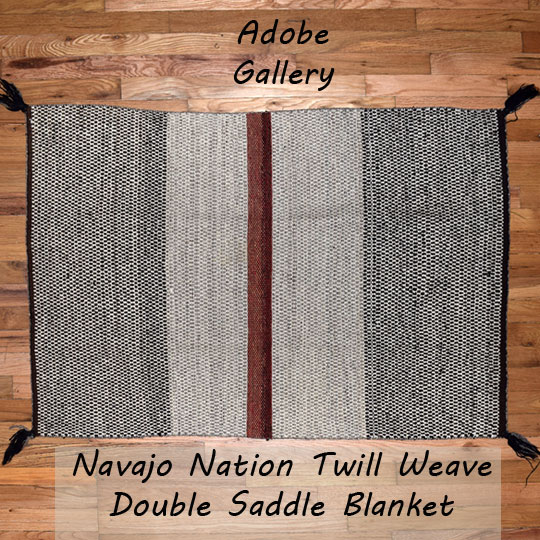 This twill weave, double saddle blanket was woven from white, black, and brown sheep’s wool after shearing, cleaning, carding, spinning, and laboriously setting up on an upright loom.  Twill weave textiles generally are made only for saddle blankets, although they are serviceable as floor rugs as well.  Twill weaves are sturdier than tapestry weaves, making them quite suitable for use as saddle blankets.

“Predominant in Pueblo textiles from the days of the Anasazi through recent times, the various twill-weave techniques were rarely used by Navajo weavers after 1800 but made a brief resurgence in popularity in the 1870s, particularly in the weaving of saddle throws and women’s mantas.” [Kaufman and Selser, 1985:138]

Twill weave saddle blankets are still occasionally made by the Diné, both for their own use and for sale.  This double saddle blanket does not show any evidence of having been used on a horse, so it must have been one that was made to be sold.

Warp and Weft:  In weaving, the weft (sometimes woof) is the term for the thread or yarn which is drawn through, inserted over-and-under, the lengthwise warp yarns that are held in tension on a frame or loom to create cloth. Warp is the lengthwise or longitudinal thread in a roll, while weft is the transverse thread. A single thread of the weft, crossing the warp, is called a pick. Terms do vary (for instance, in North America, the weft is sometimes referred to as the fill or the filling yarn).  Each individual warp thread in a fabric is called a warp end or end.  The weft is a thread or yarn usually made of spun fibre. The original fibres used were wool, flax or cotton. Today, man-made fibres are often used in weaving. Because the weft does not have to be stretched on a loom in the way that the warp is, it can generally be less strong.  The weft is threaded through the warp using a "shuttle", air jets or "rapier grippers." Hand looms were the original weaver's tool, with the shuttle being threaded through alternately raised warps by hand.   -Wikipedia

Provenance: this Navajo Nation twill weave double saddle blanket is from the collection of a gentleman from California

Reference: Alice Kaufman and Christopher Selser. The Navajo Weaving Tradition: 1650 to the Present