Navajo Pictorial Textile with Many Birds by Stella Nockideneh [SOLD] 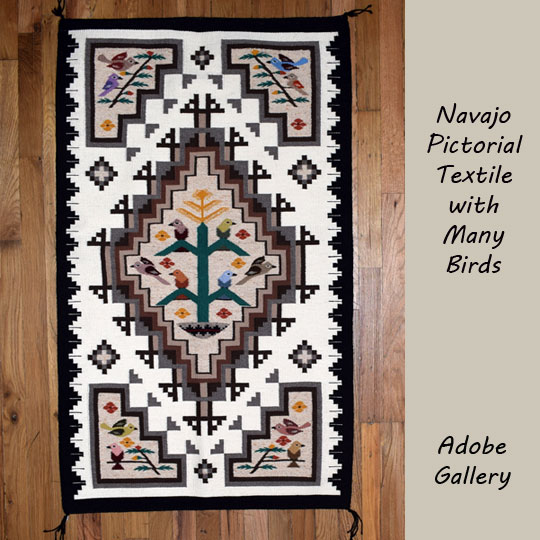 This wool textile's central theme is birds and is attributed to be a weaving by Stella Nockideneh Diné weaver from the Navajo Nation. She is known for her pictorial style textiles and fine, tightly woven rugs. The layout of the design is of the style of a Navajo Storm Pattern rug, as defined by the four corner designs which represent the four sacred mountains of the reservation. The central diamond design features a corn plant growing from a Navajo basket, over a background of wool of an oatmeal color, outlined in an elaborate border design.

The four corner boxes have evergreen branches on which birds perch.  The background wool is an oatmeal color.  All the five design panels float on a white background that is bordered in black.

To appreciate the enormous amount of work required to weave such a textile, one must visually display the rug in an upright position as it would appear on the weaver’s frame.  The yarn placement starts at the bottom of the textile and is layered one yarn string from one side of the textile to the other side, changing yarn color for each element of design. As the weaver progresses the design upward, she must visualize each pictorial figure’s shape and scale.  It is amazing that such a pictorial textile could be made.

Navajo pictorial textiles have a long history.  They have been woven since the mid-1800s, when the Diné were incarcerated at Bosque Redondo, and provided with Germantown yarn.  Pictorials of sandpaintings, yei figures, and scenes around the reservation are still being made today.  It must take many years for a weaver to master the technique.

Provenance: this Navajo Pictorial Textile with many birds by Stella Nockideneh is from a gentlemen of New Mexico

Recommended Reading: The Navajo Weaving Tradition 1650 to the Present by Alice Kaufman and Christopher Selser