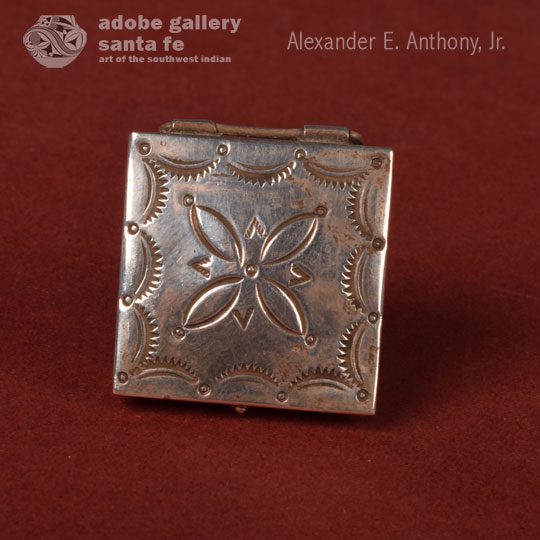 The stamped design on the lid of this Navajo sterling silver pill box features a flower-like display in the center and a row of sunrise designs around all four sides of the lid.  The side walls of the box were stamped with V elements which are filled with parallel lines.  The lid is attached with a handmade silver wire hinge.

This exquisite perfectly square sterling sheet silver pill box is shallow in depth— 1/4-inch deep.  Most of the boxes in the collection from which this box came have depths of 1//2 inch. That alone sets this one aside as special, because it differs from the others.

Although silverwork had its beginnings among the Diné around 1850 while they were incarcerated at Bosque Redondo in Southern New Mexico, it did not become a source of income until the early 1900s with the arrival of tourists in the Southwest.   At first, their source of silver was Mexican silver coins, then later they were able to acquire ingot silver, and finally in the twentieth century sheet silver became available.

By the early 1900s, Diné silverwork became a significant source of income for many families.  Of course, jewelry was the prime medium but non-wearable silver also was formed. It was probably the Indian traders and merchants in Gallup and Santa Fe that suggested to the Diné that they make items other than jewelry—small pill boxes, candlesticks, bowls and other usable items for the purchaser.

Eventually, some Diné silversmiths excelled in making significant sets of tableware, elaborate silver trays, and tea sets with teapot, sugar bowl and an accompanying silver tray.  Many of the artisans became award winners for such works.

Small pill boxes were quite likely among the earlier items made by Diné silversmiths.  They probably began making them in the 1920s and continued until the mid-twentieth century.  They have not been made much since that time. Older ones are now considered very collectible.

Provenance: from the extensive silver collection of a client from Washington, DC

- Navajo and Pueblo Jewelry and Metalwork 1880-1950 by Robert Bauver

- Masterworks and Eccentricities: The Druckman Collection

- Beesh Ligaii In Balance: The Besser Collection Of Navajo And Pueblo Silverwork by John Torres-Nez

THE LITTLE BOOK OF MARKS ON SOUTHWESTERN SILVER Silversmiths, Designers, Guilds and Traders [SOLD]
by