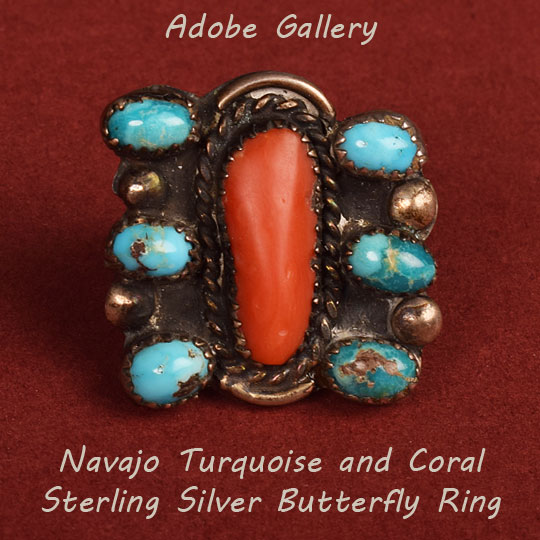 This Navajo Turquoise and Coral Sterling Silver Butterfly Ring is certainly among the most attractive of many rings made by a Diné smith. It has that balance that is so prevalent in much of the design work by the Diné—who have an inherent talent for balance. The six small turquoise stones were cut in oval and domed fashion and a single coral in its natural shape was placed between the turquoise settings.  Each of the gemstones was set in a serrated silver bezel and a single row of silver rope was wrapped around the coral setting. The edges of the ring were scalloped resulting in the ring reminding one of a beautiful butterfly.

We tend to think of the Diné having made and worn silver jewelry since the beginning of their time in the Southwest.  Actually, they did not learn the art of silversmithing until around 1850. It is generally accepted that Atsidi Sani (Old Smith) was the first Navajo smith, and that he learned the trade from Nakai Tsosi (Thin Mexican) in 1850.

From the very beginning, the smiths mostly made concha belts, bracelets, and necklaces. Rarely did they make rings until later.