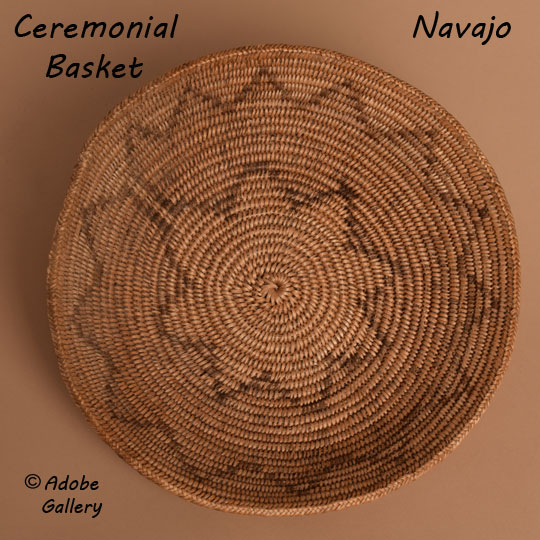 According to Andrew Hunter Whiteford, in his book Southwestern Indian Baskets Their History and Their Makers, the design on this nineteenth-century Navajo basket may be "ancestral to the classic wedding basket design, which is rare on old two-rod-and-bundle baskets." [Whiteford 1988;36]. His meaning is that the red zigzag band morphed into the straight-edged band now seen in the wedding baskets of today. The wedding basket design of today is rare in nineteenth-century baskets, but it seems to have had its start with the design of this one.

This basket has the same two colors seen in later wedding baskets-russet red and black- another clue to this design eventually transferring to today's wedding basket design.

"The most distinctive feature of old baskets with traditional designs is their construction: coil foundations of two sumac rods topped with a hank or twist of yucca fibers. The walls of these baskets are smoother and thinner than those made with three bunched rods. They are also slightly flexible and less suitable as drums. Because the fiber bundle becomes compressed on the top of the final coil, the rims of these baskets are usually flat instead of rounded, as when finished over a rod." [ibid:38]

In 1930, it was published that "Today . . . the Navajo represent the only Southwestern group to manufacture two-rod and bundle coiled basketry. There seems to be little room for doubt that the Navajo took over this trait from the earlier inhabitants of the Pueblo plateau after they arrived in approximately their present position. The trait seems not to have been reported outside the Southwest, and the probability that the Navajo invented this basketry type in an area in which it had been manufactured since early times seems unlikely." [ibid:38]

By the end of the nineteenth century, the Navajos were making very few two-rod and bundle coiled baskets with traditional designs, such as this basket. They were, by then, acquiring baskets from the Utes and Southern Paiutes who were making them to relieve the Navajo women from their imposed taboos during basket-making times. Almost all twentieth century Navajo ceremonial baskets were made by the Utes and Paiutes.

This nineteenth-century Navajo-made basket is among the last of its type made by the Navajo. Afterwards, the Navajo settled on a standard design-that of the one seen in today's wedding baskets-and only that design was acceptable for ceremonial use.

Provenance: this Nineteenth Century Navajo Ceremonial Basket is from a basket collector client of Adobe Gallery