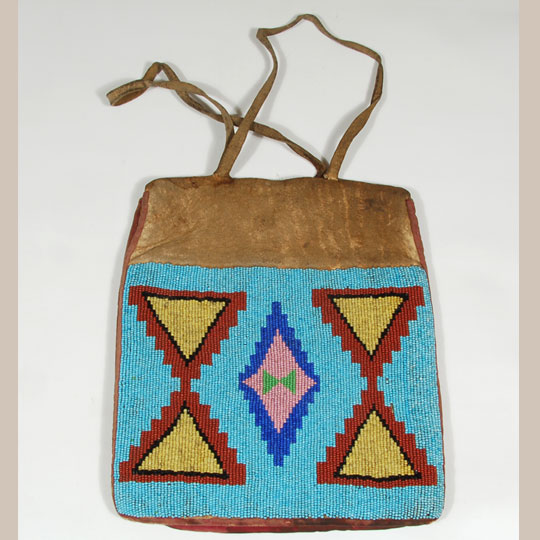 The Southern group of Plains Indians were semi-sedentary, and, in addition to hunting buffalo, they lived in villages, raised crops, and actively traded with other tribes. These include the Arikara, Hidatsa, Iowa, Kaw (or Kansa), Kitsai, Mandan, Missouria, Omaha, Osage, Otoe, Pawnee, Ponca, Quapaw, Wichita, and the Santee Dakota, Yanktonai and Yankton Dakota. Both groups included people indigenous to the region as well as those who were pushed west by population pressure linked to the ever-westward expansion of white culture.

This beaded bag is the style used to carry a variety of items, mostly items that were flat or nearly flat.  The bag was constructed most probably from buffalo hide in two separate panels.  The front panel was beaded and the back paneL designed with stitches.  Each panel is lined on the interior with a cotton printed fabric of differing patterns.  The two panels were then stitched together and the seams covered in red fabric as a border.  The bag dates to circa 1900.

Condition: very good condition with wear patterns on the interior edges of the fabric and on the red fabric on the exterior trim.

Provenance: from the extensive collection of a Santa Fe resident who is unfortunately moving to another city and found it necessary to greatly reduce her collection. 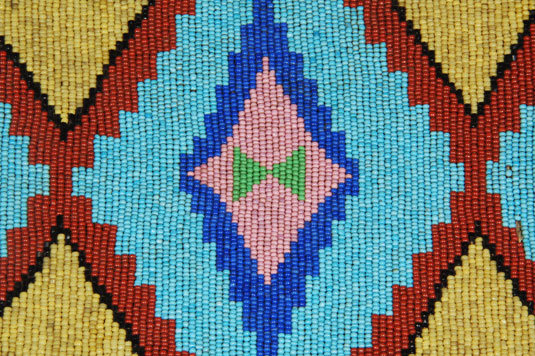 A Primer: the Art of Native American Beadwork [SOLD]
by Z. Susanne Aikman