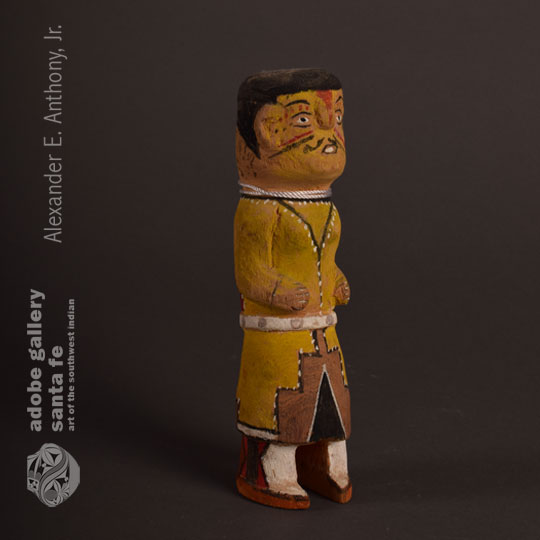 A Tewa Indian from a neighboring pueblo to Ohkay Owingeh told us that the old San Juan Pueblo celebrates so few Katsina dances that very little is known anymore about their katsinas and clowns.  He thought this might be a representation of a clan from the pueblo, particularly of the Summer People’s pumpkin group.  In the Northern New Mexico Pueblos, the society is made up of two moieties—the Winter People and the Summer People.  Each moiety is headed by a chief.  The Summer Chief is the authority from February to September and the Winter Chief is in charge the remainder of the year.

Another former resident of San Juan Pueblo said it looked like a clown representation of a Spanish man.  His explanation is based on the mustache, a typical feature worn by pueblo clowns when poking fun at Hispanic males.  Regardless of the representation, it is a wonderful carving, executed in a single piece of wood, and beautifully painted.

Provenance: Originally acquired by Adobe Gallery in 2003 at which time it was sold to the current owner.