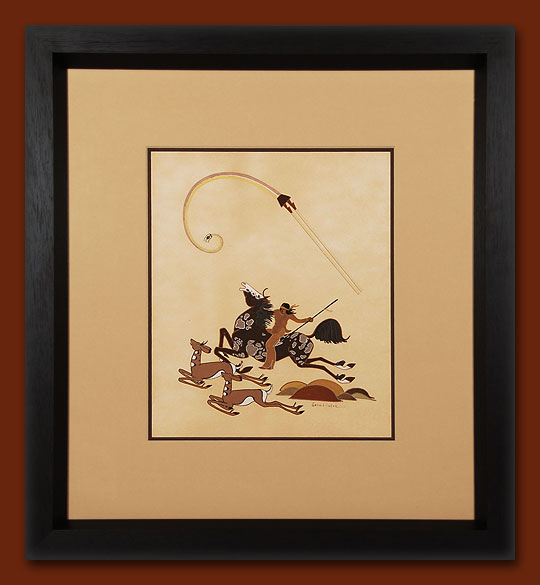 This extraordinary painting by Gerald Nailor when he was 17 years old is an excellent example of just how talented he was at a very early age.  The horse is beautifully rendered and exhibits the speed at which the rider is driving him in an attempt to catch the prey he is after.  The very modern rendition of a Yei figure overhead is overseeing and protecting the rider.

"In 1937, Nailor shared a studio in Santa Fe with Allan Houser. His paintings were exhibited in the home of Mrs. Hall Adams from 1943 to 1952. At the time of his death, he was living with his family at Picuris Pueblo, NM. Tragically, Nailor was only 35 years old when [he] died from injuries received in an attempt to help a woman whose husband was brutally beating her." -Snodgrass, 1968.

Nailor's paintings are among the rarest of the Dorothy Dunn student's works because of his early death. Paintings from his teenage years are even rarer than those from later.  He was an extraordinary artist whose work was of the finest detail.  Dorothy Dunn said of Nailor's paintings that "every detail of their design was accomplished with adroitness and polish. If one must use the term in connection with Indian art, his work was sophisticated."

Condition:  The painting has just been through paper conservation by a professional paper conservator.  All residual tape from previous framing was removed and the painting was treated for acidity and staining.  The paper is now completely acid-free.  Following the conservation process, it was framed using all acid-free materials and covered with Ultraviolet Filtering Conservation Glass.  A beautiful simple dark brown wood frame was added.  Conservation documentation accompanies the sale of the painting.