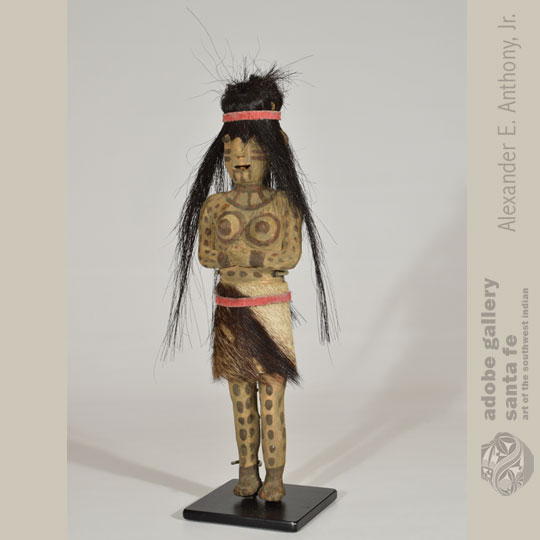 Mojave dolls are well known by museum curators and collectors primarily because of the major collection of Mojave pottery left to the School for Advanced Research, Santa Fe, by ceramists and collector Rick Dillingham of Santa Fe.  His collection of Mojave pottery, including a large quantity of pottery human figurines is documented in the book Mojave Pottery, Mojave People: The Dillingham Collection of Mojave Ceramics, published in 2001.Less known are similar pottery dolls made by members of the Yuma Tribe.  The Mojave share a cultural heritage with the Yuman people. The major Yuman groups are the Walapai, Havasupai, and Yavapai Nations in Arizona and the Diegueño, Kamia, Paipai, and Kiliwa of California.Pottery doll figurines were not an archaeologically produced item of the Yuma. None have been discovered in village excavations.  It is likely that this form was adopted from the Mojave when the Yuma potters found that they were being outsold by the Mojave. It is likely that they were made for commercial reasons.  Even so, they are relatively rare as there seem to be hundreds of Mojave dolls for every dozen Yuma dolls. Most Yuma pottery dolls probably date from early 20th century.

This female figure was made from pottery and painted with pigment.  Her body is painted in the fashion of the old Yuman female tattoos, from face to feet.  She is wearing a cowhide skirt and horsehair secured with a leather headband. A stand is provided from which she may be displayed.

Condition: this Pottery Female Figurine of Yuma Origin is in excellent condition

Provenance: We received this in 2012 from a medical doctor in Orlando, Florida, sold it to a client in New York and now have it back from his estate.

Recommended Reading: Yuman Pottery Making by Malcolm J. Rogers, San Diego Museum Papers, February 1936. (We have one copy of this out-of-print book available. See our website under the Book category - or click here to view details)