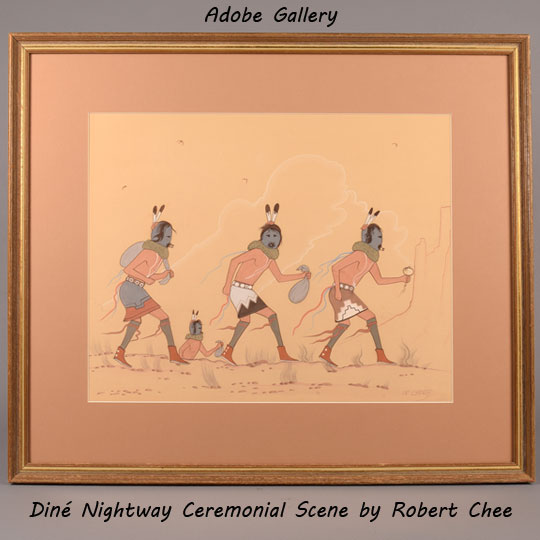 This painting was created by Diné artist Robert Chee.  We reached out to a Diné friend for information about what is occurring in this scene, and he provided the following explanation: “The painting depicts the nine-day Nightway ceremony, where on the sixth and seventh days, a group of Yeiis go door to door asking/imploring for donations—either food, bundles of fabric material, or money. In this painting, it represents the begging Yeiis returning to the ceremonial hogan after a long day's trip.”

In the foreground, we see three “begging” Yeis carrying the fruits of their labor.  The Yeis in the front and back of the procession face directly ahead, while the one in the center turns his head, staring directly toward the viewer.  A fourth Yei appears in the distance, partially obscured by the earth.  A faint cloud formation rises diagonally through the sky as a flock of birds circles the area.  Chee had a way with creating endearing figures, and this piece is a fine example of that skill.  His restrained color palette relies on earthy Southwestern tones rather than bold decorative colors, which seems appropriate for this particular image.

The painting is signed R. Chee in lower right.

Robert Chee (1937-1971) Hashke-Yil-e-Cale was a Diné of the Navajo Nation painter.  Clara Lee Tanner’s Southwest Indian Painting: A Changing Art provides a lengthy passage devoted to Chee, which includes the following: “Many of Chee’s paintings include symbols which, reputedly, reflect his familiarity with the sandpaintings of his tribe. This is not improbable for his grandfather is said to have been a medicine man. There is spontaneity in Chee’s painting, expressed in a variety of ways, from his ever-Navajo facial expression to body movement… Chee showed considerable potential which was never fully realized.” Chee died in 1971, at just 34 years old.