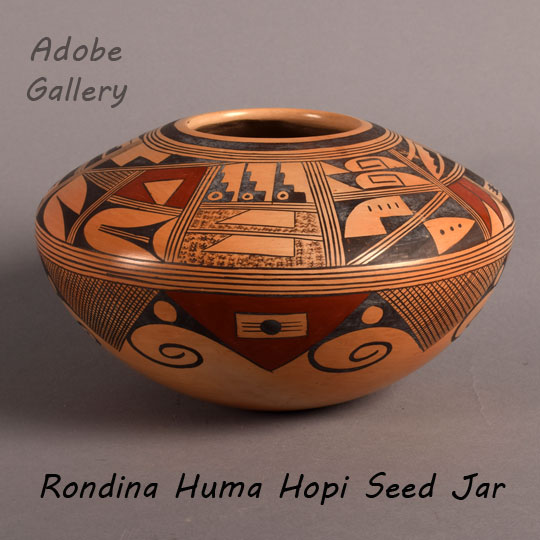 This polychrome seed jar was created by Rondina Huma, an award-winning Hopi potter. Collectors of contemporary Hopi work are likely familiar with Huma’s style, which uses bold colors to form incredibly intricate designs. This piece is likely an early-career piece, as it shows Huma working with the traditional designs preferred by her predecessors.

Huma’s designs cover the majority of the tan-slipped vessel, reaching from the rim to about halfway down the underside. A group of six lines circles the jar’s widest point, separating the upper and lower designs. Ancestral Hopi designs appear on the upper section, mostly in black with occasional touches of red. Down below, triangular forms appear, with spirals swirling in between their inverted peaks. It is fine work, which is unsurprising given what Huma would go on to accomplish later in her career.

The bottom of the jar is signed Rondina Huma.

Rondina Huma (1947- ) is a Hopi-Tewa potter who has lived in the village of Polacca since childhood.  A member of the Tewa Kachina/Parrot clan, Huma produces her pottery in the traditional method. Her vessels are hand-coiled, painted with mineral paints, and fired outdoors.  Her works are inspired by those of her ancestors, but are instantly recognizable as her own. Her complex and beautiful design work—painted with brushes fashioned from yucca leaves—has become as reliable an identifier as her signature itself.  Huma has received multiple awards at Santa Fe Indian Market and is regarded by pueblo pottery collectors as one of the finest contemporary Hopi-Tewa potters.

Provenance: this Rondina Huma Hopi Pueblo Seed Jar with Traditional Designs is from a private collection