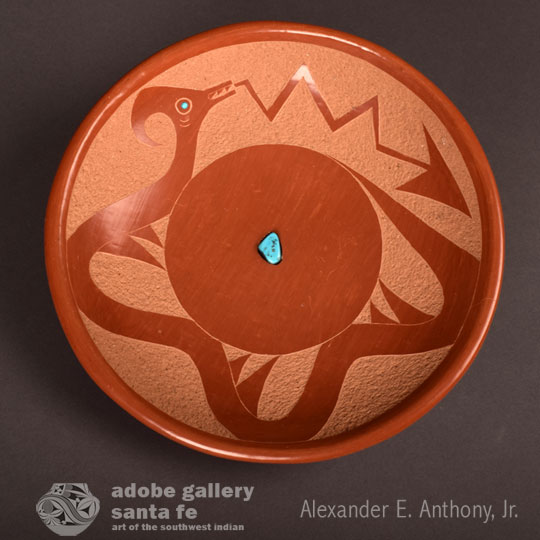 This shallow bowl by Juan Tafoya of San Ildefonso Pueblo was slipped in red clay and the Avanyu water serpent design achieved by pecking away the red slip, leaving the image.  The Avanyu wraps around the inner circle of the bowl and has a significant lightning bolt from his mouth. His eye was made with a scored circle and two semi-circle marks below. It was finished with a small domed beautiful blue turquoise cab.  A larger turquoise cab was secured in the bottom center of the bowl. The back side was left in a matte state.

Juan Tafoya (1949 - 2006) was a well-known San Ildefonso potter who passed away prematurely at age 57 years.  He specialized in sgraffito designs where he would chip away at the polished slip to form a textured background for his design, as in this instance for the design of the Avanyu.

Juan’s mother was Donicia Tafoya who was from Santa Clara Pueblo.  She married and moved to San Ildefonso. Juan Tafoya spent his full life at San Ildefonso.  From 1975 to 1999, Juan received awards from Santa Fe Indian Market and Eight Northern Indian Pueblos Arts and Craft Show.  He participated in both events annually during those periods.

Condition:  this San Ildefonso Pueblo Red Shallow Pottery Bowl with Avanyu and Turquoise by Juan Tafoya is in original condition

Provenance: originally from an Albuquerque gentleman, now from the client to whom we sold it in 2012.