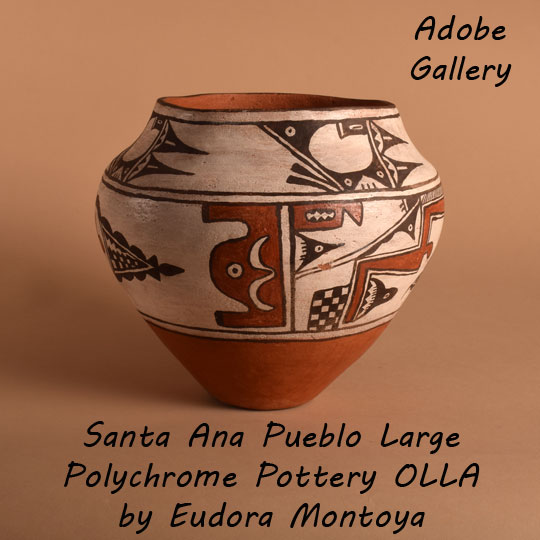 Eudora Montoya is the most well recognized potter from Santa Ana Pueblo (Tamaya). It was she who, in 1972, began teaching Santa Ana women the art of pottery making. She had 17 students in her first class. Only 5 or 6 of them continued making pottery. I don't believe any are still active today.

Although her pottery was traditional in materials and construction, generally her designs were creations of her own. The designs on the neck of this jar appear to be stylized birds (notice the eyes) and those on the body carry out the bird theme from the neck as well as introducing spiral elements and checkerboards.

The jar is not signed with the name of the artist, however, there is a photograph included of the artist holding the jar. On the back of the photo, there is a note to "see ribbon" which would indicate that this jar was a prize winner, perhaps at Santa Fe Indian Market or New Mexico State Fair, but the ribbon is missing.

Condition: original condition with a most minor missing flake of clay at the very base of the jar

Provenance: this Santa Ana Pueblo Large Polychrome Pottery OLLA by Eudora Montoya is from the collection of a family from Virginia

Photo - image of artist source: unknown.  This photo is included with the jar.