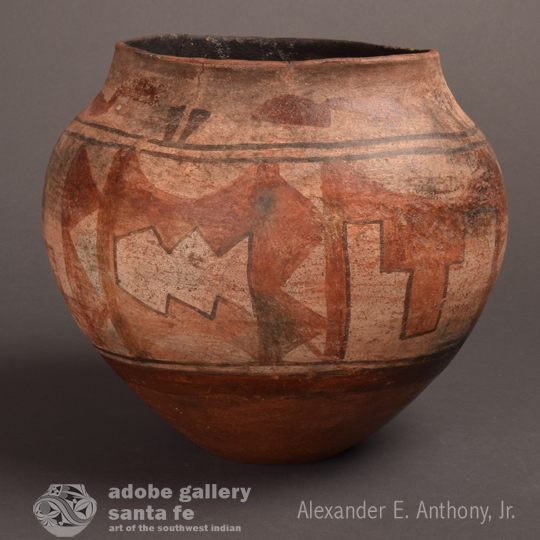 This historic Santa Ana pottery jar is a rescued chimney jar.  The lower one-third of the jar was broken off and the jar then added to the chimney of the pueblo house.  There is ample soot inside the jar as evidence.  The bottom portion of the jar has now been restored and the jar fortunately rescued for future preservation.  Left on the chimney, the jar would eventually have disintegrated.

The decoration is that traditionally known as the Eiffel Tower design.  It obviously was not designed after the Eiffel Tower, but is stepped up in that style, so, therefore, the name derivation.  The jar appears to be of the late 1800s.  There are double framing lines above and below the body design panel and a wide red band just below the lower framing lines.

It has been a tradition among the Puebloans to extend their chimney’s height by adding a pottery jar at the top.  The bottom of the jar would have been broken out and the upper part of the jar added to the chimney, a process to increase the draft of the chimney.  Why the chimney extension in this manner was done rather than increasing the height with adobe bricks is something I have not yet found out.  Perhaps the fired pottery would outlast a sundried adobe brick.

A rescued chimney jar is rather rare as they have traditionally been left on a chimney for the remainder of their life.  It has only been in the last 50 years or less that some have been removed from chimneys and restored to their former beauty.

Condition: restored lower body.  Some vertical cracks at the rim which have been stabilized. Very good condition in its present state.

Provenance: this RARE Historic Santa Ana Pueblo Pottery Rescued Chimney Jar is from the collection of a family from Albuquerque

Recommended Reading:  The Pottery of Santa Ana Pueblo by Harlow, Lanmon and Anderson